Sometimes all you want from your horror movie is some splattery gore, some funny antics, some T&A, and maybe the writer/director/star’s severed naked dick. In Todd Jenkins‘ bachelor party camping trip-set horror comedy Cherokee Creek, that’s exactly what you get. When his Bigfoot-enthusiast buddy Pat (Justin Armstrong) decides to wed his abusive, controlling, and sexually hypocritical girlfriend Caroline (Olivia Sabini), his well-meaning producer friend Jinx (Jenkins) collaborates with action star Vinny Blade (Billy Blair), and a host of other friends both inside and outside the film industry to give him a bachelor party he will never forget. Unfortunately, they choose a restricted wooded area that turns out to be a real Bigfoot’s living room as a venue. 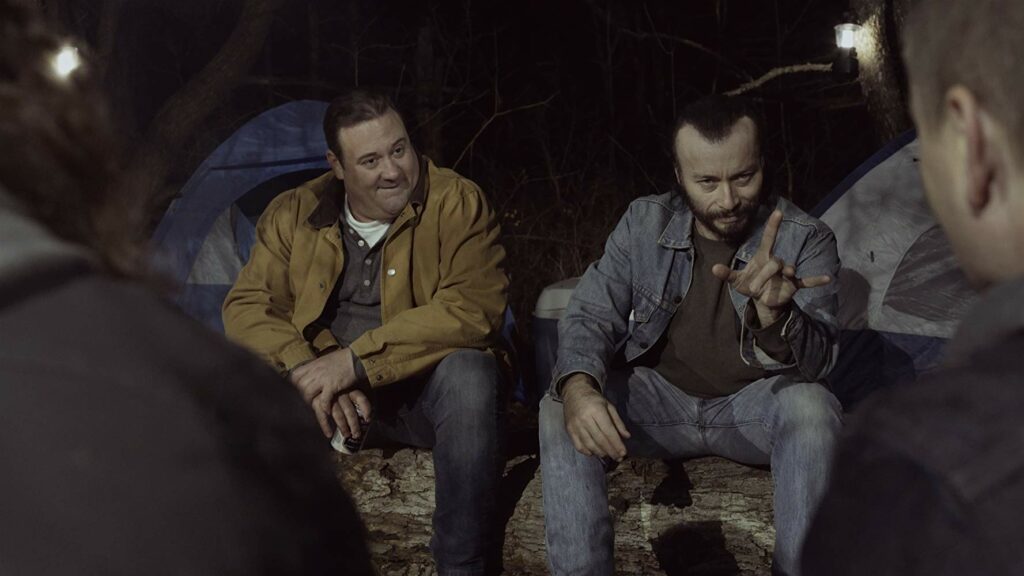 Vinny Blade (Billy Blair) and Drew (Jason P. Kendall) chat with other partygoers around the campfire at Cherokee Creek

As a film, Cherokee Creek has only minor technical problems. The voice dubbing of one of the characters in the opening scene sounds a little off, as if it were recorded and mixed at different levels than every other sound in the scene. There’s also an awkward camera scene that somewhat attempts to replicate the high teens recurring gag from That 70s Show, wherein the camera leaps from close up-to-close up around the campfire as the characters talk. Finally, a few of the actors have a little trouble believably delivering their lines. However, these are not issues that persist throughout the film and can be easily ignored by the audience given the type of movie the filmmakers set out to make. Otherwise, the set is lit well for a film that takes place in the woods in the dark, and the people behind the cameras obviously know what they’re doing.

The story, although set up well, suffers from too much up-front exposition. If you happen to watch the version of the film that includes an anti-piracy intro and an about-this-film outro by Jenkins and Blair in ski masks, the entire thing clocks in at a little under two hours. Except for the very first scene, the actual presence of the Bigfoot and the havoc he wreaks doesn’t occur until a little after the half-way point in that runtime. With a little editing of dialogue and some work on their in-camera comic timing, the filmmakers could dramatically improve the pace of this piece, possibly even shaving the runtime down to 90 minutes. I also think the film suffers from its somewhat generic title. Because of the type of film this is, and because Don’t Fuck In The Woods is already taken, I’d recommend something like Don’t Jizz In The Woods or Bigfoot Bachelor Party in order to get the message across about the kind of film you’re about to sit down to watch.

That said, I was entertained by Cherokee Creek. There are plenty of wonderful practical effects, a number of gags that often tie back on themselves as people run in and out of the campsite, and at least one surprising twist. It’s worth a watch for anyone who likes horror comedies, exploitation films, or slashers because there are elements of all those subgenres present. I’m also looking forward to seeing future work from Jenkins and company. They’ve kicked off their independent genre movies on a solid foundation. It’ll be fun to see what they build from here.

Cherokee Creek is available to stream on Amazon.