The Demonologist: A Review

In The Demonologist (2018), Detective Damien Seryph’s (Brian Krause) impending marriage to his longtime love—as well as his hope to build a normal family—is derailed by a cult of worshippers of the Four King Demons of Hell, who are structuring the return of their Kings to Earth around a series of brutal murders. As he progresses in the investigation, Damien slowly begins to realize that his aim is not to capture a serial killer—it is to prevent the imminent Apocalypse and understand the truth about his lineage.

The Demonologist‘s strengths lie in its talented cast and a few remarkable plot twists. Brian Krause carries the movie well as Damien, and infuses sincerity in the blistering frustration and dread that fuels his character. Manon Pages is mesmerizing and chilling as Meredith, one of the primary villains, and captivates the viewer whenever she appears on screen. Although Rhonda Johnson Deets has only a small role as Esther, a psychic who aids Damien through his investigation, her screen presence is powerful and authentic. Despite the common horror elements and patterns that pervade the plot, there are a few impressive twists sprinkled throughout the movie that lift the storyline from its primarily generic structure.

Even with the presence of the aforementioned positive elements within this movie, however, The Demonologist ultimately falls flat in terms of originality and pacing. The bulk of the plot moves slowly, and feels a bit paint-by-numbers in its execution. Although the pacing quickens and reveals more intrigue near the end, the shift is too uneven to redeem the majority of the storyline. A distracting factor in the movie is its special effects—while some are eye-catching and blend smoothly with the aesthetics of the film’s setting, others are a bit artificial and awkward.

Overall, The Demonologist may entice horror fans who enjoy films centered upon religious/demonic mythology or the occult, but is ultimately forgettable. 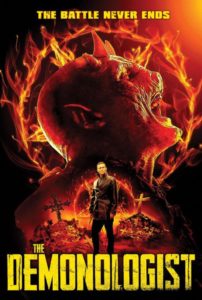