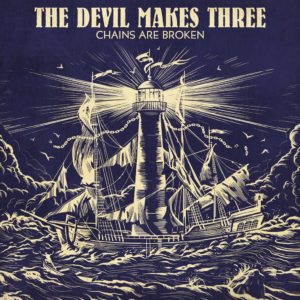 The Devil Makes Three has become one of my favorite bands over the last few months. Up until this release their sound was gritty Americana with a heavy bluegrass influence; kind of like if old country and bluegrass had a baby and it took a bath in whiskey. Songs about alcoholism, lost love, death, and violence are the norm. You wanna talk about dark themes? The Devil Makes Three has them in spades.
Chains are Broken is bit of a departure in sound but the spirit remains the same. Pete Bernhard (vocals, guitars, songwriter) wrote that this album is about how the creative process can be both desperately lonely and rewarding. He also noted that many creative people struggle with depression and self doubt and kind of live on the outskirts of society and life can get pretty dark for a creative person.  This album was meant to shed light on some of the darker parts of the life of the creative type. It does it with some hope, though, to quote Bernhard, “because the work that comes out of these brave souls, even those who don’t ultimately survive, lives on forever and hopefully enriches everyone.”
So, let’s talk about the sound of this album. Like I said, it’s definitely a departure from their usual. This is more laid back, almost like a really mellow strain of old rock and roll. Even on the slower tunes it is hard not to get caught up in the rhythm. I have seen many people complaining about the change and even bitching about them adding a drummer for the album. You won’t hear a single complaint from me. The new sound makes the perfect backdrop for the Bernhard’s killer songwriting.
Besides the great sound on this album, the lyrics are absolutely incredible. I read on the New West Records website that this album was like a book of short stories: each track telling a story of its own. That sums up the album pretty well, honestly. Some stories are happier than others, and some hit a little closer to home than the rest but every one of them are pretty damned good. Matter of fact, I want to talk about a few of my favorites.
Can’t Stop – I think this is about being driven to pursue your passion. Even if you have to make a deal with the devil or some sacrifices that make you wonder if it is all really worth it at the end of the day. It’s about being beat down by detractors and putting in blood, sweat, and tears til you’ve got literally nothing left. Or it could be about all that shit driving you to an addiction that spirals out of control. I honestly don’t know. Either way, it’s got a really bright and shiny old rock n roll feel to it that almost masks that darkness that’s barely below the surface.
Need to Lose – As someone who is somewhat of an expert at self-destructive behavior, I feel like this track is kind of a love song to the world’s worst coping mechanisms. The chorus hits pretty close to home for me, “Everybody’s always askin’ why I do what I do. I don’t gamble ‘cause I want to win, boys. I gamble ‘cause I need to lose”. The sound of this one reminds me of some good old Southern rock meets honky tonk. A damn fine tune indeed.
All is Quiet – This is one of the slower songs on the album and it might be my favorite. Are you one of those people who has dealt with the storm of emotions inside you for so long that you’ve learned to put on an outward mask to hide it from everyone? This one’s for you. All is Quiet is one of those songs that gave me chills the first time I listened to it and after hearing it about half a dozen times today, the effect hasn’t diminished.
Native Son – This song is pure America. Not to be mistaken for ‘Murica. I love this tune so damn much. It’s one of the more country sounding songs on the album. There’s no jingoistic nationalism here. Nope. This chapter of the album is the story of how this country of ours was built by immigrants and how it has repaid them. “I ain’t goin’ nowhere ‘cause I’m right where I belong. I don’t have to love it, I don’t have to leave it. Ain’t no stranger here, I’m a native son,” is a sentiment that I feel like the majority of people in this nation can get behind. The lyrics in this one are heavy and moving. If this track doesn’t touch you, you don’t have a pulse.
That was a hard list to narrow down, because honestly this is one of those albums that every track is my favorite. From start to finish, Chains are Broken is incredible. The Devil Makes Three’s sound may have changed but this release did not disappoint me in the least. In fact, it rates right up there with their self titled album and Longjohns Boots and a Belt for me. I feel like the lyrics are a little deeper and if you listen with the right kind of ears, could spark some introspection. You could also put the album on while you’re doing whatever and it would be a great soundtrack. Either way, I highly recommend picking this one up when it comes out on Friday. You can also preorder the album in a ton of formats here and you can stream it right now at AllMusic.