I know that I’m usually bringing you reviews of sleaze and gore, but today we’re gonna be doing something a little different. Today, we’re gonna talk about music. You’ve seen the title already. I’m talking about Clutch! Fuck yeah, son! I don’t know anyone who doesn’t like at least a couple Clutch songs. Mostly because I don’t need that kind of negativity in my life.

I don’t pay much attention to celebrity gossip, but apparently a bunch of famous people have a lot to say about the current situation. Some are even helping out by (very publicly) giving to charity and hosting weird live stream karaoke events on TV. Clutch, on the other hand, is just doing what they do best: being cool as fuck and cranking out the tunes! 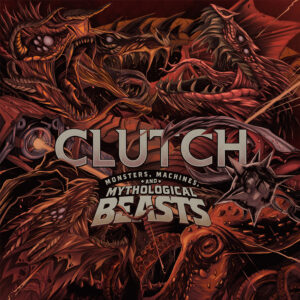 And killer cover art too, apparently

Monsters, Machines, and Mythological Beasts isn’t a new album; it’s a compilation of previously released tracks that are all about..well… Monsters, machines, and mythological beasts. It’s kind of like a themed greatest hits album. The tracks are taken from Robot Hive/Exodus, Book of Bad Decisions, Pitchfork & Lost Needles, Earth Rocker, Strange Cousins From The West, Live At The 9:30, Psychic Warfare, and Jam Room. So, they represent a good chunk of Clutch’s vast catalog.

It’s a good mixture of more recent and older tracks. Not only does the collection breathe new life into some older tracks but it is a great introduction to Clutch as a band. Until last month, if I were trying to get someone into the band I would have told them to listen to Blast Tyrant or Slow Hole to China. I would still point them to those two albums but would suggest this one as well. 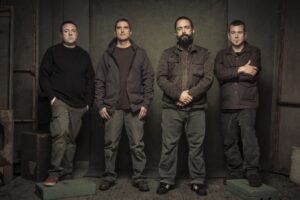 Monsters, Machines, and Mythological Beasts may be a digital-only compilation of previously released songs, but it feels like a brand new album and a damned good one at that.

There’s not too much more I can say about the album as a whole. It’s great. It’s Clutch at their finest and it came just in time to be be an uplifting soundtrack to a fucked up time. I’ve listened to Monsters, Machines, and Mythological Beasts front to back without skipping tracks more times that I can count since it came out. While I like everything in the compilation, there are some that really stand out.

This was my favorite track from The Book of Bad Decisions and is one of my favorites on this compilation. It’s a fun campy song that tells the story of an unlikely hero using folk magic to clear his barn of an infestation. An infestation of what, you ask? Demonic lawyers. That’s right, the ghoul wrangler uses folk magic to rid his property of lawyers. Fuck yes. It’s fun, funky, and catchy as fuck: all the reasons I love this band. Just watch the video and you’ll get it.

What Would a Wookie Do?

Had I not known that this was an older track, I would totally believe that it had been written in the past month or two. References to all having the same disease, needing the same relief, and mentions of a crashing stock market really make it feel like a timely track. Then again, this track, like most of Clutch’s catalog is pretty open to interpretation. It was written in a different world but still speaks to the current one. Love this track.

This is a killer track. It’s kind of a story about monsters taking over the earth but told from the point of view of the monsters. It’s about the ancient mythological beasts coming to retake their world from the weaker fearful human race. I mean, there might be some deeper meaning there. Hell, you could probably create one that would fit like a glove. Either way, this is some good old fashioned American stoner rock and you just can’t go wrong!

This  track never ceases to put a smile on my face. It’s told from the perspective of a cryptid hunter who is hunting (or being hunted by) Sleestaks. The fact that the protagonist takes time to note that the beast he’s tracking is definitely not a meth head makes me chuckle damn near every time I hear it. Stoner rock and cryptids are a match made in heaven. This song is proof.

Monsters, Machines, and Mythological Beasts is damned near perfect. It has been the soundtrack to a large portion of my quarantine. My only complaint is that there is one song that I think should have been included in a compilation of songs including mythological beasts. “The Yeti” off of The Elephant Riders would have been a perfect fit for this compilation. The lyrics talk about meeting a Yeti in the wild and having a conversation. I don’t know, maybe I’m just partial to the song for some unforeseeable reason. Who knows? Seriously that’s my only complaint about the compilation. Other than that, it’s amazing.

This is Why I Love Clutch

Monsters, Machines, and Mythological Beasts really embodies what I love about this band. It’s full of big chunky, groovy riffs, bluesy leads, and an earth rocking rhythm section. The lyrics are either entertaining stories or layered in metaphor to relay some esoteric message; sometimes it’s both. The music is fun, catchy, and really well made.

I mentioned earlier that the band is hooking up their fans with some solid tunes during the quarantine. This new release isn’t the extent of that hook up, though. The band has been doing live shows from The Doom Saloon on their YouTube channel for the past couple weeks.

As I write this there are two short live shows available to watch on their channel right now. They’re both short sets, I think they’re three songs each or something like that. The guys are working on translating their live energy into a smaller performance space with a laptop for an audience. The difference between the first and second stream is evidence that they are adapting to the new norm quite well.

Neil Fallon announced at the end of the last stream that they would be trying to do more live streams in the future. Not only are they working to set up a schedule for these shows, they’re also planning on doing unannounced streams. So, go over to their YouTube Channel and subscribe, turn on notifications, and get ready to rock out with the rest of us.

All in all, would I recommend Monsters, Machines, and Mythological Beasts? You bet your ass I would! It’s digital-only so you can probably check it out wherever you stream digital music. Personally, I’ve been listening to it (and the rest of their discography) on Spotify. If you’re a fan of Clutch or just want to check out some really good rock n roll that will improve your day, give this one a spin.