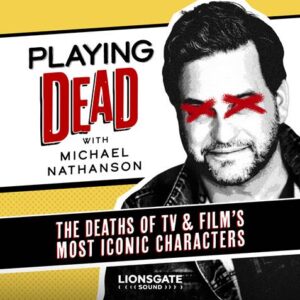 WHAT: Lionsgate Sound’s original new podcast “Playing Dead” examines the shocking, gruesome, and iconic ways in which some of film and TV’s most legendary characters have met their demise on screen. Whether they were dragged into the Upside Down by a Demogorgon or encountered Freddy Krueger in their dreams, these zeitgeisty character deaths left a mark on audiences’ memories, a legacy which “Playing Dead” explores and respects. Fans will have the opportunity to re-experience each compelling moment as told by the actors who portrayed their ill-fated characters.

This one-of-a kind podcast is a mashup of a celebration of geekdom and the eulogy the actors were never able to give for their legendary characters. Each conversation is an emotional roller coaster as talking about the role leads to a larger discussion about the actor’s life and career that led to that moment.

WHO: The podcast is hosted by actor Michael Nathanson, best known for his role as Sam Stein, the late agent in Netflix’s Marvel’s The Punisher, who will be interviewing the actors and creators who brought life, and subsequently death, to these quintessential pop culture icons.

WHEN: The podcast premieres on November 29 with new episodes dropping weekly on Tuesdays. Listen to the official trailer here.

WHERE: “Playing Dead” will be available on Apple Podcasts, Spotify and everywhere podcasts are heard.

The company aims to tell unforgettable stories; amplify, empower, and advocate for unique and diverse voices; and engage listeners in compelling, fearless, heartfelt, humorous, relevant, and inventive new ways. Lionsgate’s film, television, subscription, and location-based entertainment businesses are backed by a 17,000-title library and a valuable collection of iconic film and television franchises, making this division unique in its ability to scale its audio offerings across a broad range of scripted and unscripted content.