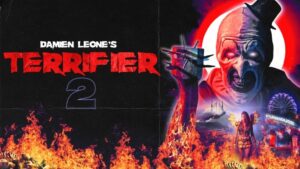 Los Angeles, CA / November 18, 2022 / Cinedigm announced today that the Company had seen a record number of subscriber sign-ups for its horror streaming service SCREAMBOX with the launch of Terrifier 2. Backed by Bloody Disgusting, one of the world’s foremost horror brands, SCREAMBOX has become a go-to for fans looking for exceptional and carefully curated content.

Launched on October 31st, the release of ‘Terrifier 2’ has led to the fastest pace of subscriber acquisition in Cinedigm’s history, with SCREAMBOX subscribers growing approximately 144% over two weeks.

Terrifier 2’s digital release on November 11 further solidified the horror community’s devotion to Art the Clown and an epic, uncut 138-minute slasher film. Up against Hollywood heavy hitters such as Nope and Ticket to Paradise, Terrifier 2 has carved out its place among the week’s top performers on transactional video on demand (TVOD), finding itself in the Top 10 after just a couple of days in the market. Terrifier 2 landed #2 on VUDU, #5 on Google Play, and #7 on Apple TV.

This news comes following a successful theatrical run for the indie horror film, which saw unprecedented week-over-week growth before reaching a global cumulative box office gross of over $11M. Terrifier 2 not only defied industry expectations but the standard theatrical lifecycle jumped +28% from week 1 to 2, +70% from week 2 to 3, and +8.5% from week 3 to 4.

“This release epitomizes our sustainable and profitable approach to streaming – one that focuses on multiple paths of monetizing movies and shows ahead of and during its premiere on streaming. We think this model allows us to bring new release titles cost-effectively to our streaming services and drives far greater awareness of new series than what would otherwise be possible. We look forward to expanding this proven model to theatrical and digital releases for our streaming portfolio including Fandor, Midnight Pulp, Asian Crush, and many more.”

This growth trajectory looks to continue for SCREAMBOX as the service has announced the acquisition of several highly anticipated films. The documentary Life With Chucky looks at the lasting impact of the iconic franchise Child’s Play, while the found footage feature The Outwaters conjures up memories of the experimental filmmaking from the late 90s. Subscribers of the service can expect up to 40 new release movies over the next 12-14 months.