There is a subgenre known as psychological horror within horror. Movies, books: the format does not matter. This brand is most commonly defined as horror light on gore, monsters, elaborate effects, or similar trappings. Instead, this type of horror drives wedges blunted blades deep into the human psyche. There it stirs the contents, seeking common ground inside the collective skull of its audience so that its story gnaws at the back of the mind long after the lights have gone up or the covers of the book have been closed.

In the end, though, isn’t all horror psychological? If the primary aim of horror is to evoke emotions or sensations, then it must be. And if you accept that, you must accept that becoming trapped in the recurring symbology of the traumas and fears that plague your mind must be horrific. It is that truth that Volume 2 of Mad Shelley Comics’s Halloween Girl relies on as the means of testing and antagonizing its main character.

Last year, filmmaker Richard Wilson of RTW Productions Inc. released the first volume of the graphic novel adaptation of his film The Halloween Girl. Based on characters that first appeared in the film and web series, the story follows a teen ghost, Charlotte Williams, as she conducts battle with a secret society known as The Hollow. Having become entangled by The Hollow near the end of Volume 1, Charlotte begins Volume 2 by trying to make sense of what has happened to her. Soon, she comes face-to-face with her psychological damage and must aid scads of others trapped in a similar predicament. 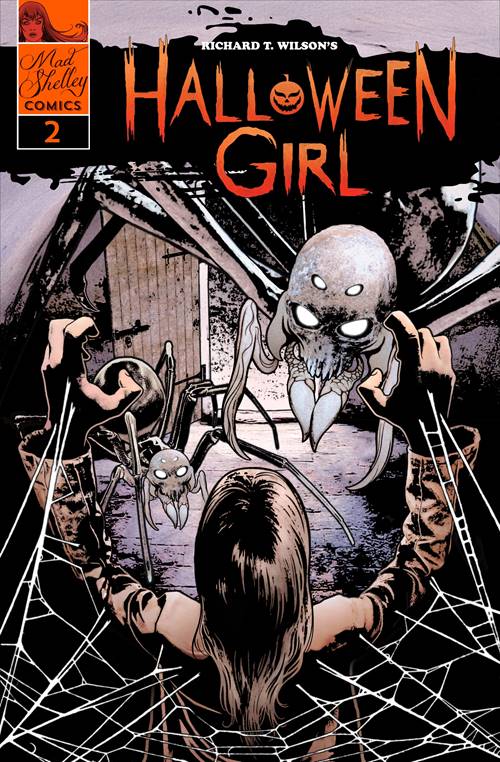 The cover of ‘Halloween Girl’ Volume 2.

Although the story revolves around defeating or at least coming to terms with one’s psychological trauma, Wilson does not wield the blunted blade like many other stories that are slapped with the psychological subgenre label do. He isn’t trying to get inside the reader’s mind to trigger common, deep-rooted fears. In Halloween Girl, the psychology is more of a plot device, something Charlotte must overcome to achieve her next state of being. Nevertheless, it is an engaging tale artfully rendered.

Issues of Halloween Girl, as well as merchandise and more information, are available at the RTW Films site. Volume 2 is written by Wilson and features art by Stephen Mullan.