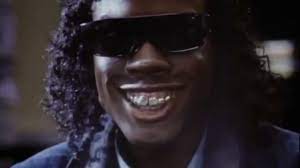 Spiral: Book of Saw is the story of three aspiring rappers who find themselves in a world of shit after plagiarizing the reputation of crime kingpin Gusto. Under their cool new monikers MC Gusto, Dead Mike and Stab Master Arson; the trio begin topping the charts with hits like “Straight Outta LoCash” and “Sweat from My Balls”….

Ok, that’s not Spiral. That’s actually the synopsis from the Chris Rock masterpiece CB4. An amazing movie that I would have much rather watched for the hundredth time than this latest Saw installment. Sequel? Rebranding? What the Fuck is Spiral anyways?

Many moons ago there was a rumor spiraling around that Chris Rock was looking to jump start the Saw franchise. It’s a statement that still sounds weird and I just watched the movie! Regardless, I was excited and I think the entire horror community was at least curious to see what Rock would bring to the table. It was then announced that Samuel L. Motherfucking Jackson would star alongside Rock. As I sit here typing that I find myself getting excited about the potential, forgetting that I just finished the final product.

Spiral is really that dull, more dull than the handsaw Cary Elwes used to remove his foot in the original film.  Remember how bat shit crazy that was the first time you watched it?! The first Saw film holds up today as a classic modern horror film. It’s overflowing with suspense and mystery, gore and torture and of course a twist ending so good it would cause M. Night Shyamalan to jump into a vat of used syringes. Remember the vat of syringes?!

The Saw movies are proper fucked up and make you wonder if you would have the testicular fortitude to carve out your own eye to obtain the key that would free you. Even as the later sequels became a convoluted mess they were at least somewhat entertaining. Maybe I just really miss Tobin Bell. While some photos of him pop up in Spiral, I was secretly hoping that somehow he was in charge of all this new mechanical fuckery.

Spiral of course starts as all Saw movies do, someone is in a crazy contraption and have a life or death decision to make. Rip your tongue out or get hit by the speeding train. It’s a pretty intense opening but unfortunately the rest of the film never reaches this amount of tension again. Chris Rock begins the movie in Chris Rock fashion and brings up some valid points about Forrest Gump. The rest of the film he plays the tough guy cop a little too tough guy. Every police station scene is so ridiculous and overacted it becomes laughable. We’re left with clues throughout the movie, playing the game of guessing who the new Jigsaw is. It shouldn’t take you long. While they do a decent enough job of trying to mislead us, this still felt like twist ending 101.

I guess what I’m most disappointed about is that this is just another Saw movie. If you like every Saw movie you will likely enjoy Spiral. If you saw the potential in the first three Saw movies and were hoping that depravity had been tapped for a new generation, well, its game over for you. 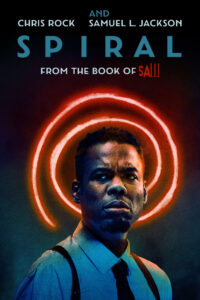 Play Their Game on Digital on July 13 and on

& On Demand on July 20 from Lionsgate®

4K Ultra HD to Include Dolby Vision® and Dolby Atmos®

A criminal mastermind unleashes a twisted form of justice in Spiral, the terrifying new chapter from the book of Saw. Working in the shadow of his father, an esteemed police veteran (Samuel L. Jackson), brash Detective Ezekiel “Zeke” Banks (Chris Rock) and his rookie partner (Max Minghella) take charge of a grisly investigation into murders that are eerily reminiscent of the city’s gruesome past. Unwittingly entrapped in a deepening mystery, Zeke finds himself at the center of the killer’s morbid game.

Spiral, which opened to #1 at the box office and stayed there for two weeks in a row, stars Chris Rock, Max Minghella, Marisol Nichols, and Samuel L. Jackson, and is produced by the original Saw team of Mark Burg and Oren Koules. The film is directed by Darren Lynn Bousman and written by Josh Stolberg & Pete Goldfinger. From Lionsgate and Twisted Pictures, Spiral is a Burg/Koules production.

The Consequences of Your Actions: Creating Spiral 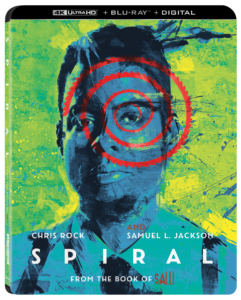 Max Minghella TV’s “The Handmaid’s Tale,” The Ides of March

and Samuel L. Jackson Pulp Fiction, Snakes on a Plane