“BACK TO THE FUTURE”

When Marty McFly befriends a scientist, Marty finds out the scientist is working on a time machine and accidentally sends him to the 1950s. He interferes with the romance of his parents and must get them reunited to ensure his own existence back in the 1980s 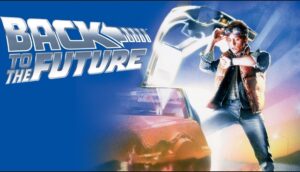 “BACK TO THE FUTURE II”

In this zany sequel, time-traveling duo Marty McFly and Dr. Emmett Brown return from saving Marty’s future son from disaster, only to discover their own time transformed. In this nightmarish version of Hill Valley, Marty’s father has been murdered and Biff Tannen, Marty’s nemesis, has profited. After uncovering the secret to Biff’s success – a sports almanac from the future — Marty and the Doc embark on a quest to repair the space-time continuum. 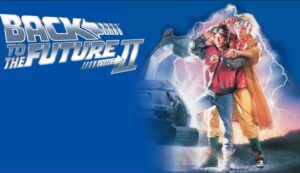 “BACK TO THE FUTURE III”

Marty McFly drives into the Old West to rescue Doc, whose blossoming romance makes him reluctant to return, from the clutches of the villainous Tannen Gang 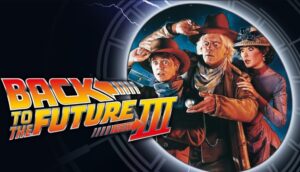 Dapper Danny Ocean is a man of action. Less than 24 hours into his parole from a New Jersey penitentiary, the wry, charismatic thief is already rolling out his next plan. Following three rules: Don’t hurt anybody, don’t steal from anyone who doesn’t deserve it, and play the game like you’ve got nothing to lose. Danny orchestrates the most sophisticated, elaborate casino heist in history. 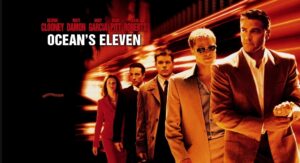 It’s been three years since Danny Ocean, and his crew–fronted by detail man, Rusty Ryan, up-and-coming pickpocket Linus Caldwell, explosives expert Basher Tarr, and safecracker Frank Catton–pulled off one of the most audacious and lucrative heists in history, robbing ruthless entrepreneur Terry Benedict of every dime stored in his impenetrable Las Vegas vault. After splitting the $160 million take, each one of the infamous Ocean’s crew has tried to go straight, lay low and have a legit life, but that’s proven to be a challenge–much to the chagrin of Danny’s wife Tess. When someone breaks rule number one and rats them out to Benedict, going straight is no longer an option; he wants his $160 million back–with interest, or else. And as the gang quickly discovers, Benedict isn’t the only powerful person in the world looking for Ocean’s Eleven. 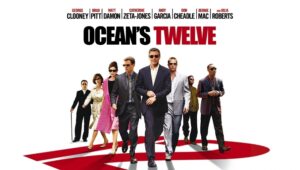 What are the odds of getting even? Danny Ocean and the gang would have only one reason to pull off their most ambitious and riskiest casino heist–to defend one of their own. But they’re going to need more than luck on their side to break The Bank. Ruthless casino owner Willy Bank never imagined that the odds were against him when he double-crossed Danny Ocean’s friend and mentor Reuben Tishkoff, putting the distraught Reuben in a hospital bed in critical condition. But Bank miscalculated–badly. He may have taken down one of the original Ocean’s eleven, but he left the others standing and, worse for him, gave them a shared purpose: to take Bank down on the night of what should be his greatest triumph–the grand opening of his new casino, appropriately named The Bank. Their strategy is twofold. First, they will ruin him financially by turning the tables on the precept that the house always wins. But that’s just money. The knockout punch will be to Bank’s personal pride and joy: his reputation as the only hotelier who has earned the Royal Review Board’s Five Diamond Award on every single one of his hotels. The plan is elaborate, dangerous and damn near impossible–but there are no limits when it comes to one of their own. 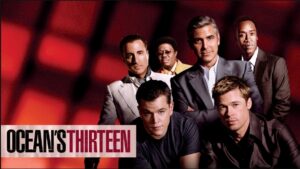 Five years, eight months, 12 days and counting — that’s how long Debbie Ocean has been devising the biggest heist of her life. She knows what it’s going to take – a team of the best people in the field, starting with her partner-in-crime Lou Miller. Together, they recruit a crew of specialists, including jeweler Amita, street con Constance, suburban mom Tammy, hacker Nine Ball, and fashion designer Rose. Their target — a necklace that’s worth more than $150 million. 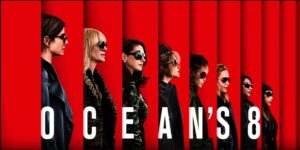