REAL TIME WITH BILL MAHER will return for its 19th season FRIDAY, JANUARY 15 (10:00-11:00 p.m. live ET/tape-delayed PT), with a replay at 12:30 a.m. Allowing Maher to offer his unique perspective on contemporary issues, the show includes an opening monologue, roundtable discussions with panelists and interviews with guests.

The series is available on HBO and to stream on HBO Max.

Politico has hailed Maher as “a pugnacious debater and a healthy corrective to the claptrap of cable news,” while Variety noted, “There may not be a more eclectic guest list on all of television.”

Maher headlined his first special on the network in 1989 and has starred in 11 HBO solo specials to date. 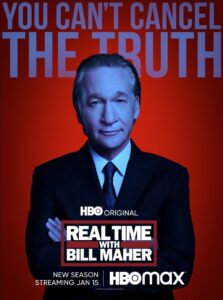