If mainstream pop culture magazines and news outlets are correct, we’re still in the middle of a thriving horror-is-mainstream renaissance. This renaissance has birthed everything from the long-running The Walking Dead TV series to the resurrection of old Stephen King stories and new adaptations of new King material. Netflix’s Stranger Things last season furthered this trend by going less Steven Spielberg-style horror and more King-style horror than the season before it.

But if horror in the mainstream is experiencing a renaissance of King-like material, independent horror seems of late to be experiencing a much less subtle revival in the form of redneck horror. Alongside Rob Zombie’s recent return to the Firefly family in 3 From Hell has come independent redneck fare like Tennessee Gothic and this review’s subject Big Top Evil. 3 From Hell and Big Top Evil have more in common than style in that Bill Moseley stars as the insane leader of a group of murderers in both films. 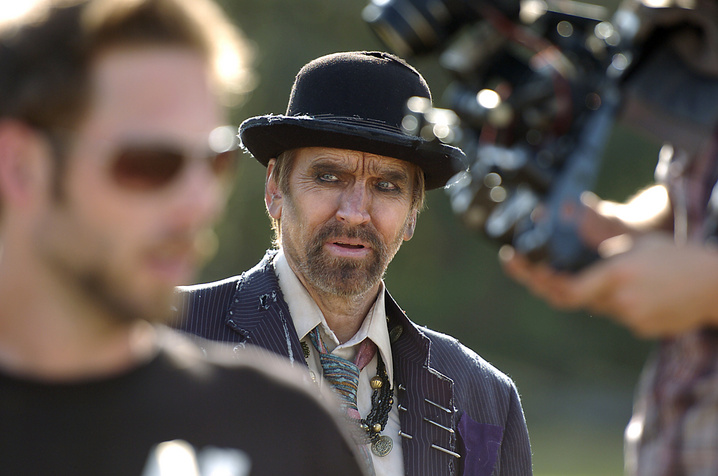 You might be thinking that Big Top Evil sounds more like the title of a circus freak or killer clown movie than a redneck horror flick. And you’re right. It does. However, the circus from which the evil spawns in this story happens to be full of good old-fashioned grindhouse-style redneck cannibals, the types you might meet in The Texas Chainsaw Massacre or The Hills Have Eyes. Incidentally, Moseley memorably played Chop Top in The Texas Chainsaw Massacre 2. The Hills Have Eyes, on the other hand, is name-checked in one of Big Top Evil’s songs.

A group of young adults on a road trip to find the location of a famous murder spree make the mistake of stopping along the way to refresh themselves and ask for directions. The group’s simple-minded traveling companion Donny (Morgan Ferreira) befriends a local named Candy (Austin Judd), who informs him that there’s both a hotel and a circus nearby where the group can get some rest and some evening entertainment. Enamored with Candy, Donny begs the rest of the group to stay the night. After some debate, they do. And that’s when things get weird.

An invitation to dinner with the circus clowns goes awry when the youths find what appears to be human remains in their food. Soon after, the young folks find themselves being hunted as fresh ingredients by a horde of cannibal circus clowns. Add a small band of punk bandits and a rival entertainer into the mix, and the film ramps up to a wonderfully bloody and freakish climax.

Written by Sean Haitz and John Morrisey and co-directed by Sean Haitz and Chris Potter, this film does more than pay homage to the plot, splatter, and gore content of the movies that inspired it. It also purposefully adopts B movie-style cinematography by way of its close-ups of angry or hysterical faces and somewhat awkwardly framed shots that often cut off actors at the forehead. 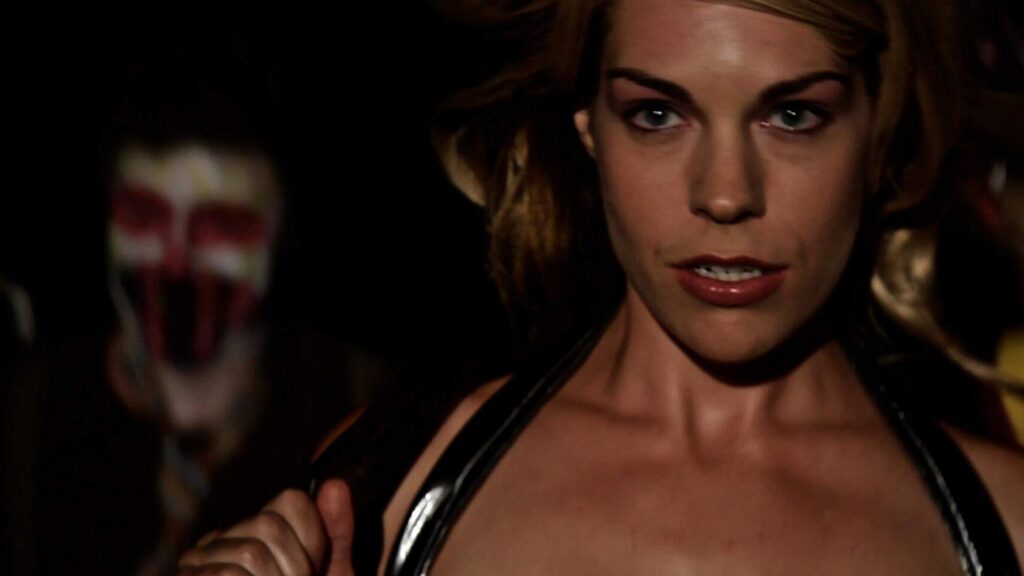 Candy (Austin Judd) ain’t as sweet as she looks in Big Top Evil.

Also similar to its grindhouse ancestors, Big Top Evil occasionally feels padded with some scenes that have little purpose other than bloating the run-time. For example, there’s a scene in a hotel room in which two of the young women in the group discover a third woman’s dildo while she’s showering and then tease her about it. The scene is funny and harmless, but it does not appear to serve the story in any way, not even as old-school exploitation (the shower scene contains no more than implied nudity). The filmmakers could chalk up scenes like this to character development, except that there’s nothing about the development of these characters that becomes important later in the film.

Another minor issue is the dialogue. Of the enormous cast of characters involved in the story, only Moseley’s Mr. Kharver got great lines. The dialogue of the other characters is sometimes stilted or unnecessary. The youths seeking the site of the murder spree spend too much time insulting each other, to the point of prompting the viewer to wonder why they hang out together at all. The group’s shared interest in true crime scenes doesn’t feel like it’s enough to bond together people who don’t really like each other on a trip like this. There’s also a wrap-around criminal justice story that might have easily been cut from the film without sacrificing anything.

All that said, Big Top Evil isn’t meant to be serious cinema or even artful storytelling. It’s intended to do exactly what its predecessors like The Texas Chainsaw Massacre and The Hills Have Eyes were designed to do: shock and entertain. In that, it is an absolute success. It’s fun. It’s gory. And if you enjoy splatter or grindhouse, it’s a movie you’ll want to add to your watch list.