Nostalgia for the 1980s was not a new thing when Netflix launched the first season of Stranger Things. The success of that show did happen to give manufacturers and retailers a reason to market to memories. Until Stranger Things, Eighties nostalgia was mostly limited to Gen-Xers like myself. We were queueing up music playlists from the era or occasionally rewatching old movies that triggered memories of what felt like a mostly carefree childhood. Like those from eras before us, we long for a time before we cared about politics, or monitoring our health and privacy and debt, or holding down a job and getting the kids through adolescence and out of the house.

Now, revisiting the Eighties and Nineties is itself a defining moment in modern pop culture. Movies, television shows, and more from those eras are being rereleased and remade. Combine that nostalgia with the current Stephen King and horror renaissance—in part prompted by the popularity of AMC’s The Walking Dead—and you realize that it was only a matter of time before the rebirth of the King/George A. Romero comic-book-style horror anthology that is Creepshow. 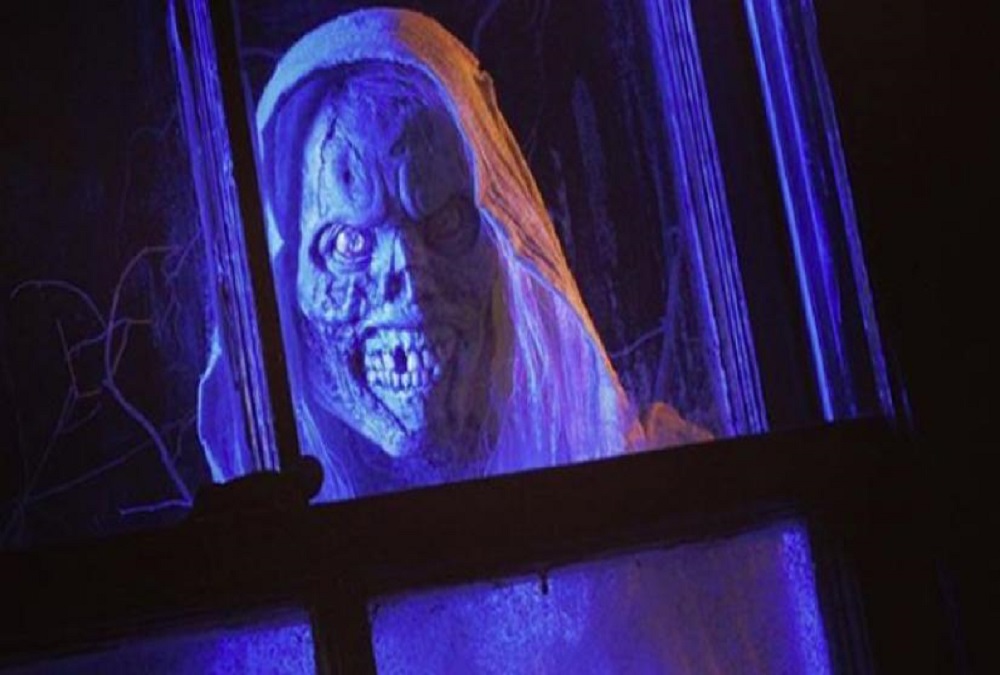 The Creep from ‘Creepshow.’ Don’t confuse him with The Cryptkeeper.

Themselves a love letter to 1950s EC Comics horror titles created by William M. Gaines, King and Romero created two legendary horror anthology films that yanked the morality-play-with-a-twist style out of horror comic books and into live-action sequences. They were scary and, most of all, fun. There’s a reason the original film used the tagline “the most fun you’ll ever have being scared.”

But if Creepshow and Creepshow 2 were love letters to EC Comics, Shudder’s new Creepshow series is a Shakespearean sonnet to the beloved film franchise. The series is helmed by none other than The Walking Dead’s Greg Nicotero who, not coincidentally, worked in makeup and effects for 1987’s Creepshow 2. So far, only the first episode of the new series has been released. If that episode is any indication of the quality of the rest of the series, fans of the film franchise are in for an absolutely authentic fright-fest of fun.

Episode 1 contains two stories: “Gray Matter,” based off Stephen King’s short story of the same name, and “The House of the Head,” written by Bird Box’s Josh Malerman. The former is a mostly faithful adaptation of classic King, the mysterious and dark storyteller that I recall from my adolescence. King’s short story collections Night Shift and Skeleton Crew remain the two books that I have most often revisited over the years. 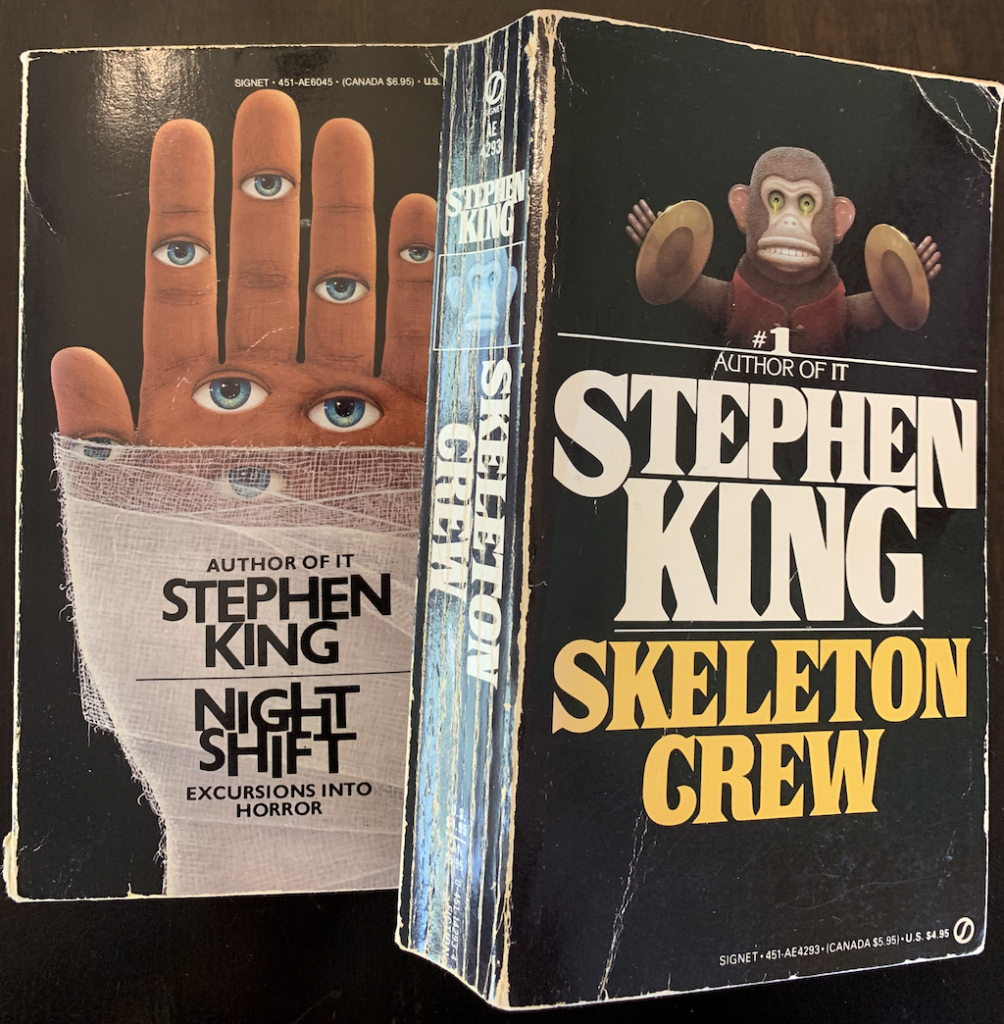 My Well-loved Copies of ‘Night Shift’ and ‘Skeleton Crew’

As you might expect, there is a wealth of King and Creepshow Easter eggs in the “Gray Matter” segment. As a fan, the sheer number of those references made it difficult for me to pay attention to the segments themselves on my first run-through. I’m not complaining, though. Finding the Easter eggs is as much fun as the episode itself. Because of that, viewers need to prepare themselves to make each episode of Creepshow a multiple watches event. To their credit, Nicotero and company aren’t just using Easter eggs for the sake of Easter eggs, at least not in “Gray Matter.” The majority of the King-specific Easter eggs at the front-end of the segment are also used in the payoff at the end.

“Gray Matter” also has the distinction of starring film franchise alum Adrienne Barbeau, albeit in a very different role from that of her drunken, snarky, and cantankerous Billie character from “The Crate.” Barbeau plays a sympathetic former tutor and now general store owner. Her presence in the first scenes of the first episode of the series along with the actual crate from her original segment is a perfect way of transitioning the viewer’s nostalgia for the old franchise into enthusiasm for the new series. 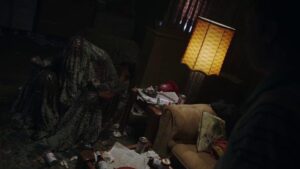 Looks like Dad picked the wrong day to keep drinking in the ‘Creepshow’ “Gray Matter” segment.

The second segment, “The House of the Head,” stars The Walking Dead’s Cailey Fleming. She plays a dollhouse-obsessed young girl who discovers that a disembodied zombie head is haunting her doll family. On first viewing, this segment feels more like an episode of The Twilight Zone or Tales From the Darkside than a Creepshow segment. “What’s the difference?” you might ask. “They’re all horror anthologies.” True, but part of Creepshow’s charm was the frequent use of Tales From the Crypt-style comeuppance and humor. “The House of the Head” is a wonderfully creepy segment, even if it doesn’t quite feel like a snug fit into the Creepshow pastiche. As if you could forget, the show reminds you that you’re watching Creepshow by way of the same comic book panel scene transitions and fun camera work the franchise used. For example, we are introduced to the toy shop owner (played by Bruce Davison) by way of a sudden and funny close-up. Like the first segment, “The House of the Head” contains many Easter eggs that refer to the original franchise. 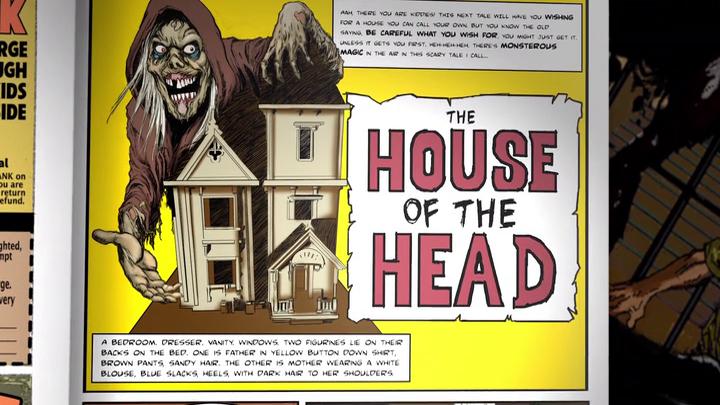 I legit want a copy of this fictional ‘Creepshow’ horror comic.

Overall, Shudder’s Creepshow series turns out to be precisely what it is advertised to be. It is a fun collection of frightful tales in the same style as the franchise. The series remains true to nearly everything that made the original Creepshow what it was, including beautiful use of comic art, color, transitions, and practical effects. What you won’t find in Creepshow are epic CGI battles, self-important plots, or overly extended and exhausted character arcs. What you will find is the purest of horror entertainment solely for the sake of horror entertainment. And that is all we, as fans, could ever ask from a series titled Creepshow.