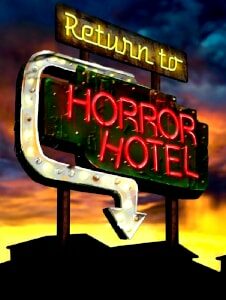 Anthologies are always a fun way to check out an artist’s work by trying out the sampler platter first. They are a staple of horror subgenre and a perfect way for indie filmmakers to make a feature without spending a lot of time or money on one story. From Creepshow to Trick ‘r’ Treat to The House That Dripped Blood, the format continues to be very successful and revered.

Ricky Hess and crew have once again used this formula to put together a sequel to their web series and 2016 movie Horror Hotel. Return to Horror Hotel is a continuation of more terror tales about tenants of a hotel where sinister things always seem to happen. Not a bad concept at all. While not as ambitious or entertaining as its predecessor, Return is still fun with some zany comedy and gross out scenes. This movie is comprised of four stories all set within the hotel.

The first short is “Sleep Tight,” starring Jeremy Michael Grey, Baby Norman, and Jenny Hall. Directed by Hess, this one is for the gorehounds and fans of body horror. Silly and disgusting, this piece shows that bed bugs take on a whole new meaning in this place.

Up next is “Guillotine,” a short about one killer necklace charm. Starring Stephanie Stevens, Ann Marie Gideon, James Edward Thomas and directed by Brandon Thaxton, the story unfolds as two beautiful ladies meet a creeper named Al Sharko at the infamous Hotel to make an exchange. Simple yet enjoyable, this chapter is a cautionary tale about how want and envy can sometimes lead only to downfall. The mirror effect at the climax is very cool.

“No Time For Love” is the third installment and is the most effective of the bunch. Ricky Hess directs this one with Kat Rarick and Jason Will Gaglione as the lead cast. Jonnie Rhey (Rarick) gets sent of a quest to deliver a copy of 20,000 Leagues Under the Sea to a reclusive that no one has ever seen. Curiosity gets the best of her, and she tries to trick the hermit Ted Bundy style but it backfires when she falls and hits her head. Rescued and tended to by Davie Jonas (Gaglione) the hermit, the chemistry starts to flicker when she wakes up. After much conversation, it is revealed that Davie is actually a warped version of the old Davy Jones sailor legend, and he is stuck in a phase of time. Original and touching, this short has some good effects and make-up effects.

The final short is entitled “ Houdini’s Hand”, this one directed by Brandon Thaxton. Tony Folden, Montrel Miller, and Mike Bend with James Edward Thomas returning as Al Sharko play roles. This episode was the least effective for me. Two thieves try to fence a box with the supposed hand of magician Houdini that can be used to open safes. Trouble ensues from there.

All in All, Return to Horror Hotel is a clever concept and does deliver some neat little stories. Fans of low budget indie horror should enjoy this one. The acting and cinematography are up to par with typical indie movies shot on a shoestring budget. No Hollywood actors or explosions here, just a cast and crew having fun making a campy little anthology. Not a lot of blood and no nudity but still not bad.

2 thoughts on “Did we learn nothing from Psycho? A Return to Horror Hotel Review”