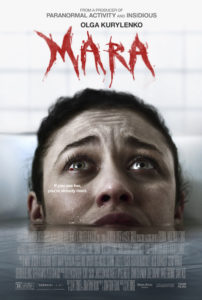 – In folklore, she is called many things. In Iceland folk culture sleep paralysis is generally called having a Mara. A goblin or a succubus (since it is generally female) believed to cause nightmares (the origin of the word ‘Nightmare’ itself is derived from an English cognate of her name). Here are a few common “hags” found in folklore around the world.

-Slender Man – his portrayal was spot on aesthetically, no matter the thoughts of the movie. Despite using some cgi in parts, it was cool to see him as the titular villain, with some standout scenes that made this Creepypasta fan yearn for a more standout film with him in the role.

-The Crooked Man (the Conjuring 2) – I actually thought a lot of his movements were cgi, which was not the case, which makes me rethink my feelings about this movie. I actually appreciate the fact that he is getting his own franchise around this portrayal. Next year with the release date, let’s hope Javier gets to shine!

– Keyface (Insidious: The Last Key) – while this character deserved some more of the spotlight, when he was on film, he owned the role.

– Mama (Mama) – this was the film that made me take notice of him, and I was impressed that despite some cgi, he stood out as the long limbed ghoul! Looking forward to the sequel that was announced this past year.

– Hobo (It) – I was happy to see him cast in this movie, even if it’s more of a cameo villain. I’m curious if he will be in Chapter 2 at all tho as Pennywise is most likely going to take that spotlight once again, and rightly so.

Which brings me to Mara (2018), whom Javier is playing the titular Dream Demon aka The Old Hag (Old Hag Syndrome) Mara. There have been quit a few “sleep paralysis” horror flicks released lately, Slumber (2017), Dead Awake (2016) and the segment in 10/31 (2017) aptly called “The Old Hag”. One of the creepiest released recently, that is not a horror movie per say, but a documentary titled The Nightmare (2015) (Netflix/Bluray). Varying in watchable to superb, they all have a common theme, the process of sleeping at night is SCARY AF!

Mara is pretty procedural in its first half, as it’s more of an investigative crime thriller with cops and a criminal psychologist investigating the deaths of people that believe in the Mara entity. It’s the second half that I’m all into, as the hauntings of our lead character, Kate are what start building some tension. This is where Mara also appears more to pop out and be creepy. It’s not anything necessarily new, but if you like the familiarity of a “cursed to be haunted by a long haired specter” flick, ala The Grudge/The Ring, you’ll dig it.

Thumbs up for Javier as “Mara”, the man is just plain CREEPY…and he knows what to do with that body! He contorts and he creeps along in such a manner that makes even the most lackluster movies, somehow watchable.

The cinematography is good, it does feel a bit like a made-for-cable horror flick at times, but still pretty atmospheric at times. The deaths aren’t gory or anything, it’s people being suffocated by The Hag, but there was a brutal suicide in the movie involving fire and a nasty eye lid scene that had me squirming. The ending, while I won’t spoil, was pretty nightmarish and effective despite being a little bit abrupt.

I blind bought this one on bluray for cheap, def will rewatch again so it’s a keeper. It has a creepy plot, especially if you like movies like The Mothman Prophecies and The Grudge/The Ring, you’ll want to scoop it up.