?>
TERRIFIER 2 Slashes Onto Screambox on Halloween

After grossing over $5.2 million in theaters in just three weeks, Terrifier 2 will stream uncut exclusively on Screambox on October 31. It will also expand to over 1,000 theaters nationwide this weekend.

Stephen King praised the film for “grossin’ you out old-school.” Its unprecedented performance and unrelenting gore have garnered buzz from Howard Stern, The New York Times, Forbes, People, The Talk, and WWE.
Terrifier 2 will be available on 4K UHD (Best Buy exclusive), Steelbook Blu-ray (Walmart exclusive), Blu-ray, and DVD in December via Cinedigm as part of its Screambox collection. 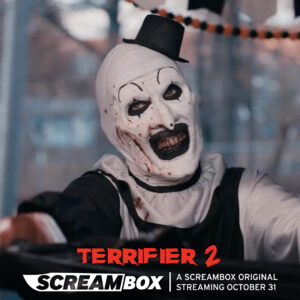 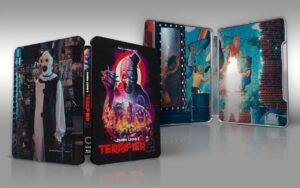 In the sequel to the 2016 cult classic slasher Terrifier, Art the Clown is resurrected by a sinister entity and targets a teenage girl and her younger brother on Halloween night.