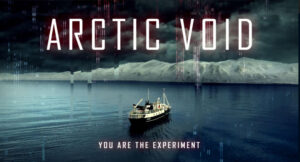 When almost everyone vanishes from a tourist ship in the Arctic, fear becomes the master for those who remain.

When almost everyone vanishes from a tourist ship in the Arctic, fear becomes the master for the three who remain. Forced ashore and alone in the elements, the men deteriorate in body and mind with the clock now ticking on their survival. In the end, a dark truth emerges that forces them to ally or perish.

ARCTIC VOID is the story of childhood friends, Ray Marsh and Alan Meursault, in the far north to make an episode of their modestly popular travel and nature show, Vagabond. Since their regular cameraman fails to get a visa, they’re joined by local hire an ex-pat, Sean Tibbets.

What starts as a once-in-a-lifetime day cruise quickly descends into madness as all but the three of them vanish from the boat. Left alone in the elements, the clock now ticks on their survival. The unexplained disappearance casts cerebral family man Alan into an existential crisis. On top of this, his health is declining rapidly for reasons beyond anyone’s understanding.

While Ray focuses on finding a way out alive, Sean is distant and detached. When Alan uncovers evidence linking Sean with the disappearance, Ray confronts him and learns a dark truth: the missing tourists were victims of a sonic weapon test gone awry. A test that he and Alan had unwittingly inoculated themselves against. But the knowledge offers little solace as Sean seems doomed as well, abandoned and realizing his role as a scapegoat for the shady organization behind the catastrophic experiment.

Ultimately, Alan’s body follows his mind in submission to the inevitable. And while Sean appeals for mercy from the powers above him, he gets none. Which leaves Ray, alone and in a no man’s land between death and life, but with the one thing that could turn the tables in his favor: an indomitable will to survive.