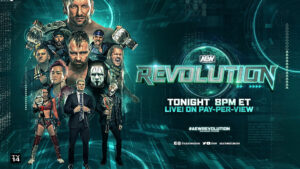 AEW presents it’s first PPV of the year: AEW Revolution. Emanating from Daily’s Place in Jacksonville, FL in front of a limited crowd in the outdoor venue. I applaud AEW for doing this infront of a LIVE crowd. This is a sport, in my opinion, that NEEDS to be held in front of a LIVE crowd. I, for one, am very excited for this PPV. Great card and lots of hype surrounding the “mystery” wrestler that will be signing a contract with AEW. Pitter Patter, Let’s Get At Her!!

Intros were great. I absolutely LOVE that the crowd sings Jericho’s entrance music. Great match here. Good pace. I feel like Jericho slowed it down to fit his style now. Now, he can still get after it when he needs to but his style seems to be more deliberate nowadays. Bucks still got to lay their shit in. Good double team moves from them. Good amount of false finishes and counter moves. Could have been about 2 less false finishes but I was ok with it. Jericho is without a doubt one of the GOATS of professional wrestling. He’s not Flair……yet. He’s damn sure getting close! MJF sold his ass off in this match(and his ring gear had had a great throwback look to it). Bucks with the win. Solid ass match. as Entertaining as I expected it to be.

First teams in were Dustin Rhodes and QT Marshall VS Dark Order #5 and #10. Teams that followed were: Santana and Ortiz, Matt and Mike Sydal, Dark Order’s Stu Greyson and Evil Uno, Austin and Colton Gunn, Pete Avalon and Cezar Bononi, Varsity Blondes, Bear Country, Jurassic Express, Butcher and The Blade, Private Party, SCU, Pac and Phenix, Dark Order’s Silver and Reynolds. Pretty good for a Tag Team Battle Royale. Not many eliminations until Jurassic Express came in. The last two contestants in this match were Jungle Boy and Rey Phenix. Great action between these two. Multiple high spots and crazy move sets that one would expect from these guys. Jungle Boy wrestled his ass off in this match. Phenix gets the win and Death Triangle(Pac) get a title shot against The Young Bucks.

Slower style match. Few high spots. More like strong style spots. Pretty physical match between these two. Beat the shit out of each other, They look tired as shit at the end. Lots of false finishes. Lackluster finish. Wish the finish would have been a little more exciting to cap off this pretty damn good match. Good story telling in this one.  Nyla Rose and Vikki Guerrero attacked everyone after the match. Probably because they were pissed at the finish.

Miro and Sabian VS Chuck and Orange Cassidy

Miro and Sabian attacked Chuck and Orange Cassidy backstage before the match. Worked them over pretty good. They put Chuck’s head through a window in a door. Miro dragged him to the ring and he was already bleeding rom his eye. Miro said that Chuck could stop this but Chuck to the ref to ring the bell and start the match. Seemed like a good physical match. Halfway through I went and fixed me some food so I missed some of it. I know that freshly squeezed got his kicks in and that Miro made Chuck tap by submission. Was pretty good from what I saw. OC is entertaining as fuck. Miro is in GREAT shape and was clearly misused in WWE.

Damn physical match. I have definitely not given Matt Hardy enough credit throughout his career. GREAT build up to this match. GREAT storytelling to this match as well. He worked a specific body part on Hangman. Made for a good Old School match. Hangman gets the win in the end with the Buckshot Lariat. One of my favorite finishing moves that anyone does. I’m high on Hangman. Can work many different styles but has a good old school aura about him.

Winner of this match gets a shot at Darby Allin’s TNT championship, To win the contestants had to grab a huge brass ring suspended above the ring.  Decent ladder match. Hard to beat Razor VS Shawn or the great tag team ladder match with The Hardy’s, Edge and Christian, The Dudley’s and Jericho. Good high spots from each competitor. Best spot was Penta using the destroyer on Cody on to a ladder outside of the ring. This move caused Cody to have to be taken to the back only to return a few minutes later. Poor Cody also got powerbombed off the ladder by Lance Archer. He took a pretty good beating. Lots of false finishes in this one as there are in all ladder matches. Early on it seemed that the wrestlers did not have their timing down when going up the ladder and having to wait for the other guys to get them off the ladder. It got better as the match went on. Scorpio Sky got the win. Well deserved. He is one of the wrestlers on the roster that can pretty much work any style and still get his shit in.

Since the day that Paul Wight appeared on AEW TV he has hinted that a mystery wrestler of HOF caliber was going to sign with AEW at Revolution. There was quite a bit of speculation as to who it was going to be. There were rumors of Brock Lesnar, CM Punk, RVD and even John Cena. Well, it turned out to be Christian Cage AKA Christian from WWE fame. He for sure is a great tag team wrestler and had a really good singles run in WWE and IMPACT. He will be a great addition to AEW. I was just expecting a bigger splash signing. Definitely did not expect the mystery wrestler to be him. Happy for him. Hope he still has some left in the tank for AEW.

Cage and Starks VS Sting and Darby Allin

This was a non sanctioned match held in some sort of warehouse at an undisclosed location. Pretty cool intro of Sting and Darby. Darby does a lot of these intros himself. Dude is talented with just a camera and his mind. This was too much like Taker VS AJ match at last years Wrestlemania. Sting did look pretty good in this street fight though. It really played into his strengths. It was believable. Darby got destroyed but kept coming back for more. The most impressive thing I saw in this match was Cage had Darby in a suplex position and walked up a flight of stairs holding him in that position. I know Darby is one of the smaller wrestlers on the roster but it still took some real strength to walk him up those stairs. I liked the ending. After they threw Darby against the wall and a window frame fell on him and glass was everywhere, Sting and Starks were going at it pretty good. After some interference for team TAZ it finished up on the ring with Sting hitting Starks with the Scorpion Death Drop. Ending of match made up for the beginning for me. I felt like I was going to be let down but the performers worked their asses off to put on a pretty good street fight.

By now, most of us have seen the Japanese Death Matches that Terry Funk and Mick Foley made famous for us here in the states. If you have never seen the actual Japanese Death Matches, I implore you to do so post haste! Good build up for this one. Two of the biggest most beloved names in wrestling in the most dangerous match in wrestling. This match had a 30 minute timer and when 30 minutes was up, all of the exploding charges would go off and the ring would explode. Started out with them getting close to the barbwire and exploding tables. Both got close to hitting them but took awhile till one of them did. Once they did they went all out! Mox was bleeding first after Omega threw him in some barbed wire. Next, Mox whipped Omega into the ropes and as he hit them they exploded. Omega sold the shit of of the ropes “exploding” It was pretty cool to see them beat the hell out of each other with barbed wire bats and sling each other into exploding ropes. Mox actually hit Omega with the Dirty Deeds DDT on to a platform laced with barbed wire and rigged to explode. The explosion was lackluster but the barbed wire damn sure wasn’t. The Good Brothers from IMPACT wrestling came down to assist Omega in working over Moxley. Mox hit them with a baseball bat wrapped with said barbed wire. Was a good little spot. Then Kenny hit Mox with an exploding baseball bat wrapped in barbed wire. That was pretty fucking cool and I did not see that coming! Then Omega hit Moxley with the 1 winged angel and took the victory. The timer for the ring to explode was under a minute. Omega had Moxley hadcuffed and he was unconcious in the middle of the ring as the timer was counting down. Omega and The Good Brothers kicked rocks and hightailed it to the back. Eddie Kingston came down to try to help Moxley but to no avail. The timer was almost to zero. There was only one thing that Eddie could do and that was to shield(No pun intended) him with his own body. The timer hit zero and then after about 5 seconds it looked like sparklers tied to the ring post starting going off. Then maybe some roman candles went off beside the ring along with a few puffs of smoke. The ring exploded! No. No it didn’t. Seems as if all the pyro were duds. I felt bad for the performers and all involved for the “exploding” ring. The limited audience booed the shit out of it as well. I think I said “WTF” out loud to myself. Something definitely did not go as planned. Had to be frustrating for them. But the announcers sold it as did Eddie and Moxley. They really had no other choice but to sell it. Disappointing ending to a brutal ass match. They worked their asses off though. Was not their fault. That’s LIVE TV for ya!!

All in all it was a great PPV. I was not mad at ponying up $50 for it. Kept me entertained for the most part. If you haven’t watched AEW yet then what the hell are you waiting for. Great talent that work their asses off every match, Sure, it has some flaws but I will say this, it gets better every time I watch it. Might not get better by leaps and bounds but you can see improvement each week. They actually give a shit about their product and their craft.