Death Of A Dryad signed a deal with Wormholedeath for the physical release of their new album ‘Hameln.’ The digital format will be unleashed via Trisol Music Group.

Initially the album should have been out on December 2020, but the 2nd Covid wave, that is hitting Europe heavily, delayed the release. All the dates TBA. Death Of A Dryad (DD) is an atmospheric dark metal duo from France, whose universe mixes metal riffs with atmospheric ambiances

“Although this year has been trying for everyone, it was also quite an intense one for us. We were lucky enough to enter Tidalwave Studio at the beginning of the year right before the first lockdown to record our upcoming album “Hameln” and then to sign its release through Wormholedeath and Trisol. We are extremely grateful for their support!

Trisol label includes bands that inspired Death of a Dryad a lot – Project Pitchfork for example, whose song Requiem is covered in “Hameln” -, and Wormholedeath is delivering a tremendous amount of energy to release the album worldwide in these strange times. “Hameln” is our second full-length album in which we chose to explore the story of the Pied Piper of Hameln. But more than a simple story, we felt that we could relate the Piper’s story to Death of a Dryad universe, as we see it as a metaphor for the vengeance of a nature overexploited by man, eventually leading to its own end. Although unwanted at the time of the recording, it echoes strangely with what we are facing now.”

The band comments about the delayed album release:

“We initially planned a world-wide release on the 3rd of December, but the second wave of COVID is hitting us hard in Europe, and we will had to delay this release to the end of February 2021.” 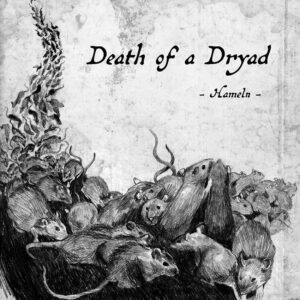 Recorded between January 2020 and March 2020 at Tidalwave Studio and Dark Faery Records studio.