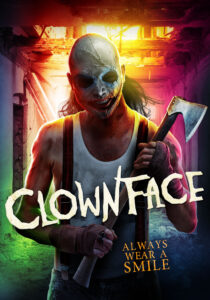 Creepy clowns get the Leatherface treatment in Clownface (2019), in which a serial killer with a clown mask crafted from human skin wields his twisted command of murder and terror over a small town in the UK. When a young woman named Jenna (Hannah Douglas) looks for answers into the disappearance of her friend and roommate Zoe (Dani Tonks) a year prior, however, Clownface’s invisible reign is challenged—even as his body count rises.

Although Clownface attempts to deliver a tight, blood-drenched thriller with a villain who echoes such brutal and memorable horror icons as Leatherface from The Texas Chainsaw Massacre and Art the Clown from Terrifier, the film fails to rise to the level of its classic predecessors. A few strong moments of generous gore are present; however, the pacing of the story, the aesthetics of the film, and the timing and volume of the score (despite its cool and engaging overall sound) often feel awkwardly executed. Even though Philip John Bailey (Clownface), Hannah Douglas, and Dani Tonks offer solid performances, the surrounding cast is often inconsistent in terms of portraying their characters in a convincing and nuanced light. The movie’s ending holds slight promise in its bold and unflinching resolution, but the majority of the film does not match the satisfaction at the end of the final act.

Overall, Clownface offers a surface level of entertainment, but its weaknesses may not allow for any lasting impression or legacy in the slasher subgenre of horror films.