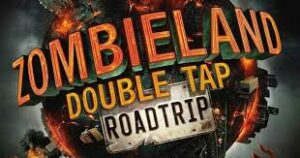 Set after the events of the first movie, Zombieland: Double Tap – Road Trip is a ridiculously fun top-down twin-stick shooter featuring local co-op multiplayer for up to four players. Play as your favourite heroes from the original — Tallahassee, Columbus, Wichita and Little Rock — as well as new unlockable characters from the upcoming sequel.

Use your special abilities, an arsenal of weapons and the essential Zombieland rules for survival to stay alive against huge numbers of uniquely grotesque and dangerous undead monstrosities in Zombieland: Double Tap – Road Trip’s story-based campaign mode, wave-based horde mode, and ongoing daily and weekly challenges.

Zombieland: Double Tap – Road Trip is being exclusively distributed in the UK, EMEA and Australia by Maximum Games.

GameMill Entertainment, located in Minneapolis, Minnesota, is a third-party publisher of casual games for the mass market consumer. Development platforms include PC, Nintendo SwitchTM, Microsoft consoles including the Xbox One video game and entertainment system, XBLA, Microsoft Games On Demand, and Sony consoles including the PlayStation®4 computer entertainment system and mobile devices. With development across the globe, GameMill is a source of entertaining and fun games for all ages. For more information, please visit https://gamemill.com.

High Voltage Software is an award-winning independent video game development studio and the most prolific console game developer in America. Located in Hoffman Estates, Illinois, and New Orleans, Louisiana, the industry-leading company has successfully produced a wide variety of entertaining games in their 26 year history, including The Conduit, Mortal Kombat X, Saints Row: Gat out of Hell, Injustice Gods Among Us: Ultimate Edition, Hunter the Reckoning, and Lego Racers. More information about High Voltage Software and their remarkable products can be found at www.high-voltage.com.

A decade after Zombieland became a hit film and a cult classic, the lead cast (Woody Harrelson, Jesse Eisenberg, Abigail Breslin, and Emma Stone) have reunited with director Ruben Fleischer (Venom) and the original writers Rhett Reese & Paul Wernick (Deadpool) for Zombieland 2: Double Tap. In the sequel, written by Rhett Reese & Paul Wernick and Dave Callaham, through comic mayhem that stretches from the White House and through the heartland, these four slayers must face off against the many new kinds of zombies that have evolved since the first movie, as well as some new human survivors. But most of all, they have to face the growing pains of their own snarky, makeshift family.

About Maximum Games – Maximum Games is a top 20 full-service publisher and curator of quality games across all major platforms and global markets. The company is dedicated to its never-ending pursuit to bring unique gameplay experiences to consumers worldwide through strategic partnerships and a hands-on approach to publishing, marketing and distribution. For more information, visit www.maximumgames.com.