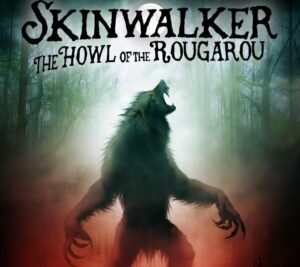 Skinwalker: The Howl of the Rougarou

The term skinwalker has become a household name due to the popularity of History Channels’ The Secret of Skinwalker Ranch. The Mormons aren’t the only ones battling off creepy dogmen though. Skinwalker: The Howl of the Rougarou takes us deep into creole country where the elusive cryptid has haunted the swampy landscape for centuries.

Seth Breedlove has my dream job, hunt cryptids and meet the people who have seen them. I could never do the job even half as well as he does and I love him more with each film I watch. Breedlove asks the right questions and knows his way around filmmaking. Skinwalker is possibly his most visually striking and beautiful release so far. While southern Louisiana is breathtaking throughout the film, it also seems the fitting home of something sinister. I have zero doubt that a creature such as the Rougarou could exist in the swamps and bayous. So does it exist? That’s a question that’s left up to the viewer.

We meet many locals throughout the film who share their run-ins with furry bugger as well as learning the expansive history of the creature. If you see the Rougarou you can’t talk about it for 101 days, it hunts down Catholics that don’t follow lent, most importantly it snacks on bad kids. The film is an interesting combination of investigation and folklore and makes good use of CGI to show just how chilling a Rougarou encounter could be. CGI is usually my biggest gripe in cryptid documentaries but Skinwalker was the first where it didn’t bother me. With such limited evidence, the CGI helps to tell the story instead of relying on it.

I didn’t know anything about the Rougarou going into this which I thought was exciting. I had a clean slate and just wanted to soak in everything I could. Skinwalker is the perfect documentary to jump-start your interest in this legendary creature. It left me wanting to know more and even planning my own trip to check out the annual Rougarou fest. It’s possibly the highest praise you can give a documentary, the desire to learn more after viewing. If you’re tired of the same old cryptid documentaries then I strongly suggest watching Skinwalker.

Skinwalker: The Howl of the Rougarou is available to rent or own on September 14th. Check it out on iTunes, Amazon Prime Video, Vudu and FandangoNOW. There will also be a special edition Blu-Ray from Small Town Monsters ($18.99) and DVD ($14.99) available on their website.