Director Richard T. Wilson’s critically acclaimed film The Halloween Girl is now a graphic novel. The first volume is scheduled for release on Oct. 1, 2021. Based on characters that first appeared in The Halloween Girl film and its sister web series, Under the Flowers, Halloween Girl Vol 1: Promises to Keep sees angst-ridden teen ghost Charlotte Williams return in this brand-new adventure. Charlotte, played by Catherine Kustra in the film, battles the diabolical secret society The Hollow. Alongside her supernatural ally, Poe, they fight for the soul of Crystal Springs. Not to mention their own salvation.

Film director and series creator Richard T. Wilson says the idea for the graphic novel came to him while wrapping the last season of the Under the Flowers.

“I realized I had so many more of Charlotte’s stories to tell that I just couldn’t fit into the series,” says Richard. “Long story short, I had been envisioning a graphic novel adaptation of the characters featured in The Halloween Girl and Under the Flowers films for awhile. And so, I finally dove in!”

The stories have continued to develop during Vol. 1’s creating. Richard says Vol. 2, Gods and Monsters, is written. He is currently working on Vol. 3.

Richard Wilson is president/writer-filmmaker of RTW Productions Inc. RTW is the umbrella company for the nationally recognized educational film company Outreach Arts Inc. It is also the parent of the award winning film company Mad Shelley Films. More than 70 of Richard’s plays and films have been produced. He is perhaps best known for his work creating the critically acclaimed, multi-award-winning TV/DVD series Maple Ave as well as the supernatural web series Under the Flowers.

Series artist Stephen Mullan holds a Foundation Degree in Art and Design and a BA in Illustration and Visual Communication from the University of Westminster. He is an Irish artist with a proficiency in comic book art, illustration, and graphic design. Stephen frequently works with indie comic book publishers all over the world to create unique and distinctive artwork to support their robust stories.

Series star, actress, and multi-media artist Catherine Kustra has worked with Richard and Mad Shelley Films since its conception in 2014. She appeared in both Halloween Girl and the Under the Flowers series. Catherine says she’s thrilled to see Mad Shelley Films take the leap into graphic novels. She looks forwards to readers experiencing Halloween Girl in a new form. 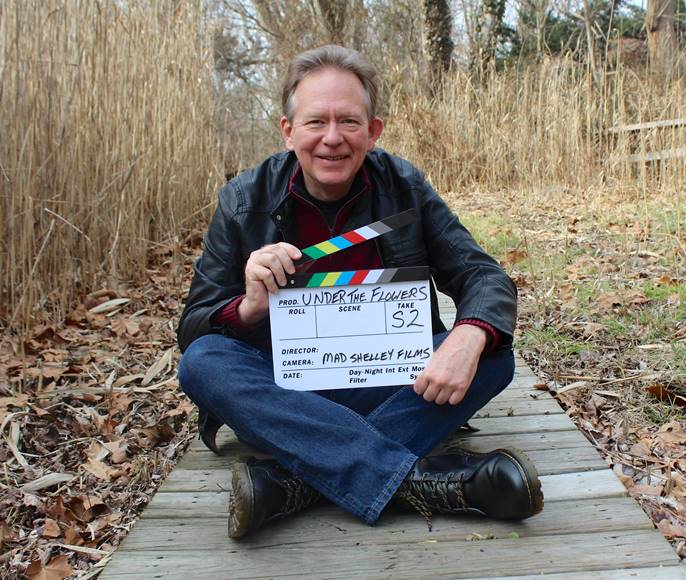 “Death is a lot of damned work,” thinks 18-year-old ghost Charlotte Williams as she braves the world of the In-Between. Inside, Charlotte finds clues she desperately needs to turn the tide in her battle against diabolic secret society The Hollow, a dastardly group who took her life. Their ultimate goal is to end the world.

Returning to the “Bone Yard” (aka Crystal Springs Cemetery), Charlotte meets up with her supernatural gal pal Poe. Poe, an acerbic goth, works with Charlotte to decipher her latest clues. Following a series of confrontations that continue to escalate the danger, Charlotte’s discovers that The Hollow have kidnapped her young son, Luke. To rescue him, Charlotte and Poe must separate. Each confronts their own dark past as they rush to save the world.