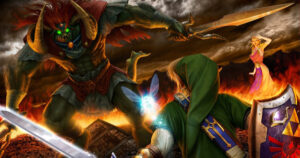 I’m sure many will argue with what I’m about to say but I no doubt mean it from the bottom of my cold black heart, The Legend of Zelda games are the BEST horror games ever made. I can hear the rage already, Resident Evil fan boys clacking away at their keyboards, Mountain Dew pulsing through their cholesterol laden veins. Look, I love the Resident Evil series, I also love the Amnesia series and even Five Nights at Freddy’s. Hell, I love all horror games. It gives us the opportunity to see what we would do in certain horrific situations. Die A lot.  The sad thing is that most are just boring gore filled action games. Gone are the days of counting bullets and saving your weird green herbs; knowing that some insane boss lurks just around the corner.

The first Resident Evil was a masterclass in horror. Inventory management and limited resources kept you filled with anxiety throughout the entire game. Remember how utterly fucked you felt when that first zombie dog jumped through the window? Or when you realized it takes more than one shot to drop a zombie? Amnesia upped the ante by doing away with weapons all together. Instead you have a lamp and balls of steel. That game is not for the faint of heart and you may find yourself screaming at the TV. Ok, maybe that’s just me but the first time one of those slack jawed skin bags lurched towards me I shit. Five Nights at Freddy’s has some incredible lore but relies entirely on jump scares, which it does to perfection. While these are all monumental games, their respective series have definitely taken a dive. Resident Evil 7 was incredible, switching to first person was a good call and the environment change was very welcomed. Especially when you find yourself at the dinner table with a family that makes the Sawyers look like the Brady’s. So where does Link fit in to all this? Our little elf like hero, trotting around in his goofy green hat. Playing flutes and harps, trying to save some princess from a pig wizard. Let me learn ya something, not only are these games always epic and challenging but you’ll be upping your Effexor half way through them.

First off, there’s a genuine sense of dread I get from playing Zelda games. No other franchise so perfectly frames the ongoing battle of good and evil, light and dark. Last Friday, Legend of Zelda: The Skyward Sword HD released on Nintendo Switch. I never played the original on Wii because I had zero interests in motion controls. As cool as it sounds to swing a sword at Hyrulian critters, I just didn’t think the technology was there and it would likely suck. I, as usual, was wrong. Skyward Sword is a massive game and as intense as anything I’ve ever played. Back to the dread. So here I am with a sword and shield which is going to break at any moment. Toothy plants from Little Shop of Horrors are chomping at me, creepy bats are swooping down and all I have to give me any range is a slingshot. Now take Resident Evil, there’s some zombies, I have a FUCKING GRENADE LAUNCHER, oh it also launches acid grenades. Not enough? Let me pull out my shotgun, my machine gun, my pistol, RPG etc. I don’t give a shit what the situation is, if I have an RPG I’m full of courage.

Link manages to get by on some magical medieval weaponry but never really has the upper hand. He just seems to barely skate by just in time to keep searching for the princess. There’s an urgency that’s always in the back of your head, “My God what if Ganon is eating her face already?” Let’s focus on Ganon for a minute, the ultimate evil in all of video game land. Not Ganondorf who by all means is scary enough, but his true form. Gigantic tusky pig demon. He’s scary as fuck! I dare say even with an RPG I’d be scared. An RPG isn’t doing shit to Ganon. So here you are, little pointy eared kid not even wearing proper armor, facing off against huge pig monster man. Not to mention the nightmares you’ve encountered along the way. Legend of Zelda boasts a serious collection of horrifying enemies. The very first game had us battling bats and skeletons but it was the Wallmaster we all feared. A creepy hand that could go through walls, grab, and take you back to the dungeon entrance. Everything in Majora’s Mask is fucking scary especially the constipated moon slowly making its way to destroy everything. While everyone one of those will pucker your pooper its Ocarina of Time that will cause the most therapist visits. I will never forget my first encounters with the ReDead’s. Grotesque, slow moving, frail looking shells of people. Mouth agape as if in constant agony and the sound they make will send shivers up your ass. Curiosity will eventually get the best of you and you’ll get too close resulting in a horrific scream as it wraps itself around you and starts chomping. Fuck That.

Yes I’ve played Blair Witch, yes it was good. It’s still not better than Zelda though. Zelda doesn’t even set out to be scary yet achieves it better than anything else. Isn’t that how it goes with everything in horror though? The films that try to scare us, try to be over the top, often times fall flat. It goes to show that a solid story with remarkable characters will always outweigh jump scares and gore. Maybe I just care more about Link and his journey than I do Chris Redfield and his, well, whatever the fuck he’s doing. I hope one day we get back to true survival horror, Silent Hill, Fatal Frame and the originals that defined a genre. Until that day comes I’ll stick with brave little Link.