Bullets of Justice: The Future is Pork 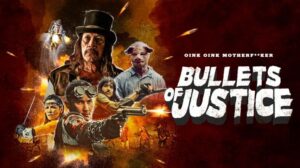 Bullets of Justice is a sci-fi action horror movie set after the end of World War Three. The United State Government enacted operation Army Bacon to create a race of super soldiers. What they created was a whole new species known as Muzzles. They’re humanoid hog monsters with a  chase for human blood and they’re at the top of the food chain. Muzzles hunt and farm humans for food. One bounty hunter, his assistants, and his sister are out to bring their reign of terror to an end.

That’s kind of what it’s about anyway. They do continue to hunt down the head of the Muzzles but there is so much other shit going on at the same time. There’s some teleportation, some time travel, some sex, and a whole lot more. Bullets of Justice is a weird wild fuckin’ ride, you guys. Strap In, let’s get into it. I’m going to try not to spoil anything but I don’t think it’d matter much anyway.

So the movie starts off with our main character, Rob Justice, executing a Muzzle alongside his attractive female assistant. Before the body is cold an armor-clad jet pack riding pig mutant flies in and an epic battle ensues. After defeating the beast, they find a place to fuck in celebration. Shortly thereafter about a dozen hog monsters smash through the wall and kill the assistant. Rob is able to action movie the shit out of most of them before escaping.

This is one of those movies that lets you know right up front what you’re dealing with. If you’re not down with jet pack pig men, backpack midgets, and weirdly placed, at least partially unsimulated sex scenes this isn’t for you. It only gets weirder from there.

There’s some flashbacks that show Rob and his sister Raksha being raised by a grave digger played by Danny Trejo. Raksha has a thick mustache through the entire movie and it’s addressed but never explained. Apparently the two were separated from some years and then they find each other once again. At this point Raksha takes over the position of his “assistant”. She takes over all of the positions.

From there, its pretty much spoiler after spoiler. I can say this, though: it keeps getting weirder.

The supporting cast is fine but the muzzles and the super siblings are really the only memorable characters in the movie, though. That’s not necessarily a bad thing, either.  Watching this movie is like trying to listen to a long and complex story just as the acid really takes hold. The difference is that it’s the story that weaves in and out of focus and forgets what it was talking about.  So, it really helps that the characters that you follow are, for the most part, incredibly entertaining. The super Siblings are both post-apocalyptic warrior badasses. She has never lost a fight and he is the most famous bounty hunter ever.

Side note: Danny Trejo is barely in this movie. I went into this movie only seeing the poster and expected him to play a bigger role. I was a little disappointed in that but it didn’t take away from my enjoyment of the film. However, this same movie with Trejo and Michelle Rodriguez as the leads would be fucking amazing. Seriously watch this movie and imagine that it’s Machete and Luz killing mutant pigs.

The makeup and costume design in this movie is crazy good. Each of the hog monsters is unique and the prosthetics are incredibly well-crafted. These creatures look so good that it totally makes up for the CG explosions, fire, and muzzle flashes. Hell, I even overlooked the CG blood because the Muzzles and other practical effects are just so goddamned cool.

All in all, would I recommend this movie? Look, man, I’m going to level with you here. I loved this movie. I’d watch it again. I think if you’re into weird, visually appealing, modern “B movies” this one is for you. If not, skip it. I watched it with a friend who hated just about every frame of it and yelled at me about how confusing it was for ten minutes. So, it’s definitely not for everyone. If you watched John Dies at the End and thought it could’ve been a little weirder, give Bullets of Justice a watch. You can check out the Horror Collective and find all the ways to watch this and several other killer indie films.