Redwood Massacre Annihilation tells the story of grieving family members of a victim of the infamous Redwood murders. When a stranger obsessed with the murders approaches them with new evidence the embark on a journey into the stomping grounds of the Burlap Killer. They went looking for answers what they found was nothing but trouble.

This is a sequel to 2014’s Redwood Massacre. That film followed a handful of campers in the English countryside who were hoping to spend the weekend at the infamous Redwood House where gruesome family murders took place years before. They weren’t even there a whole day before the unstoppable force that is the Burlap Killer started picking them off one by one. At the same time, you could watch Redwood Massacre Annihilation without seeing the first film and be just fine. I’ll discuss the film as a standalone as well as a sequel and try to keep spoilers to a bare minimum.

Tom Dempsey is an author and the father of one of the victims of the murders from the first film. While at a signing for his latest book about the Redwood Murders he is approached by a man named Max who claims to have evidence that will lead him to the answers he’s been seeking. After some convincing Tom calls on his daughter Laura (Danielle Harris) and the rest of their team to go and follow this new lead. They find an underground base as well as the answers for which they were searching.

Redwood Massacre Annihilation isn’t that straightforward, though. There is a lot of mystery, betrayal, and bonding to be done along the way. You get to spend time with the team and get to know some of them a little better while gaining insight into their motivations. 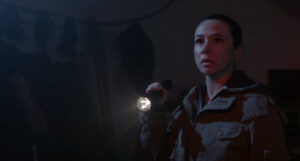 There aren’t many characters in this movie and I found myself either not caring about them or really liking them. For instance, Max, Tom, and Jen are just kind of there. While Max and Tom play major parts in the development in the story, I didn’t much care about them. On the other hand, I liked Gus and Laura so much that I would watch a movie centered on those two. Gus is a likeable asshole, a bit of a psychopath, and a gun nut. This dude packed more heat than a steam train’s fire box. Harris’ Laura was just a stone cold badass; she had some nice moments with her father and with Gus as well but when it came down to it, she was a bad motherfucker. As far as intimidation factor goes, I’d rather knuckle up with Gus or the Burlap Killer. 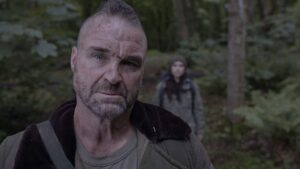 One of the best things about The Redwood Massacre Annihilation is the Burlap Killer. He’s a hulking beast of a man hellbent on destruction. He reminds me of Jason but with a way cooler mask. Seriously, look at this mask and tell me it isn’t one of the coolest designs you’ve seen for a slasher in a long time. 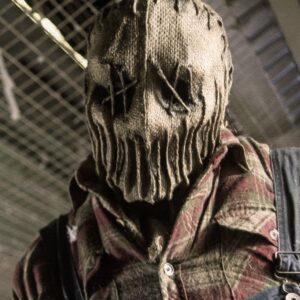 After watching both of these movies, it seems like he has the same regenerative properties as Jason as well. I’m hoping that he’ll be back in a few years to silently slaughter some more random killables.

While I found Redwood Massacre Annihilation really enjoyable, I don’t think it works well as a sequel to Redwood Massacre. I don’t think that’s necessarily a negative thing, though. Honestly, I enjoyed this movie way more than I did the first one. The best part of the first installment was the kills and effects, everything else was just kind of middle of the road. This film is much more balanced and thought out. I probably wouldn’t watch the original again while the new installment has some rewatch value.

It’s not just a disparity in quality that sets these two films apart. The only thing that really binds them together is the killer. It’s technically in the same region but if you hadn’t seen the first film you wouldn’t know that. The original was a British film with a fully British cast. The only thing that clued me into the fact that Redwood Massacre Annihilation was set in England was that they said they were going to sneak onto an RAF (Royal Air Force) base; the entire cast was American or at least all sported American accents.

Also, in the first film the killer was some kind of vengeful spirit of the land. Kind of like a badass British Jason Voorhees. In this movie, the killer is linked to a more modern form of resurrection instead of being a vengeful spirit.

So, In my opinion, it’s not a great sequel to Redwood Massacre. It is, however, a far better film. No matter what is used to bring back the Burlap Killer and fuel his rampage, he’s still a great killer.

All in all, would I recommend Redwood Massacre Annihilation? Yeah I would. It’s a good slasher flick with some nice twists and turns and one hell of an ending. The effects, performances, and writing are all solid. You can check this one out starting October 20th on DVD and VOD, just in time to add it to your Spooky Season watch list.