Widow’s Point tells the story of Thomas Livingston, an auther who is down on his luck. Livingston decides to spend a weekend in a notoriously haunted lighthouse as a publicity stunt for his latest book. He soon finds himself in the center of his own ghost story.

There are several types of films that I absolutely love. Haunted lighthouse movies are on that list. I think it has something to do with the isolation and the relatively small space. I don’t think I’ve seen a film set in a lighthouse that I didn’t like. So, when Widow’s Point came across the desk, I jumped on it. I’m glad I did.

Widow’s Point manages to merge several stories into one smooth narrative. On one hand, you have the stories behind the multiple tragedies that made the place a paranormal hotspot. On the other hand, you have the story of Livingston and his small crew who are working to exploit the infamy of the location for his new book. These stories are put together like a spooky jigsaw puzzle and become one seamless narrative. 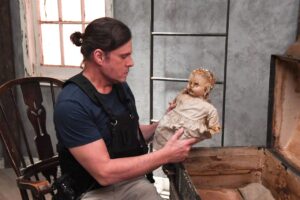 The history of the location is pretty interesting. It involves shipwrecks, spirits looking for closure, mass murder, and a couple suicides. There are equal parts sadness, death, and some genuinely scary things that go into making the lighthouse on Widow’s Point the haunted spot that it is.

With Livingston, we have a man who seems to be at a low point in his career and his life. He is recovering from a divorce and, I suspect, is using the weekend as much as a getaway as a publicity stunt. When things start to go wrong, you get the wonderful combination of the ghosts and Livingston losing his mind. I love watching people being driven mad by ghosts and Craig Sheffer does a great job of showing a man being broken by angry spirits.

I liked the way Widows Point looked. The view from the lighthouse is beautiful and the interiors are very nice. This juxtaposed with the paranormal activity and violence that takes place there makes for a really nice atmosphere of fright. 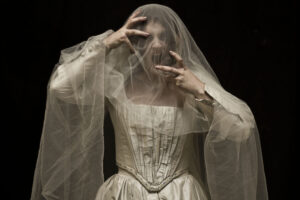 All in all, would I recommend this movie? Definitely. It’s not a perfect film but ghosts in a lighthouse breaking a man’s mind is a hard concept to beat. The final reveal manages to make a really good movie even better. Widow’s Point is a great example of what a small and talented cast and crew and a great location can create. You can check this one out September 1 on DVD and digital.