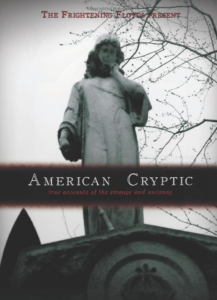 Anubis Press is excited to announce the release of AMERICAN CRYPTIC- TRUE STORIES OF THE STRANGE AND UNCANNY by author and filmmaker Jim Towns, now available on Kindle and in paperback.

AMERICAN CRYPTIC is an open-minded cynic’s take on the uncanny and sometimes frightening things that border our accepted reality. Through thirteen stories and essays, author and filmmaker Jim Towns examines several legends native to his own roots in Western Pennsylvania, and recalls some of his own unexplainable experiences as well. From folk tales of Native American giants buried under great earth mounds, to a haunted asylum, to a phantom trolley passenger, this work seeks not only to present the reader with new and fascinating supernatural tales, but also to deconstruct why our culture is so fascinated by their telling and re-telling.