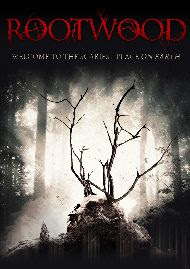 Rootwood is directed by Marcel Walz and is about two student podcasters of The Spooky Hour, Will (Tyler Gallant) and Jess (Eliss Dowling) who are asked by Hollywood producer Laura Benott (Felissa Rose) to go into the woods and document their experience concerning the legend of The Wooden Devil and the missing people in the forest. They are joined by their friend, Erin (Sarah French), who is more diva than ghost hunter and tags along due to her crush on Will.  However, Will is more about that fame and money then landing the girl.  Although the podcast focuses around paranormal phenomena and urban legends, Jess doesn’t seem nearly as eager as Will to get hands on with this documentary.

A woodsman learns that the forest and family he loves is in grave danger and makes a deal with the devil.  For the safety of the forest he hands over his soul to the Devil and the gates of hell are opened.  People begin to disappear in the forest and the rest of the town people say the woodsman is possessed and has the powers of the Devil, so they hang him and burn his body.  However, the killing doesn’t stop.

Jess is strong, reasonable and the likable character out of the lot. Will is a typical college guy who is not really committed to anything. He is focused on the gain of fame and money that this easy opportunity could land him.  The two lead actors do a good job acting out their friendship on screen.  Sarah is an annoying fish out of water in her skintight dress and several suitcases while flirting with Will, but that’s because her character is played well. I enjoyed it when she loses her mind from fear and gets out of Dodge. Actress Elis Dowling ends up carrying this film especially when things actually go down (which doesn’t really start till more than halfway through the movie).  This lady knows how to convey true terror and really pulls it off.  She also has glimpses of a sense of humor that plays naturally on screen. Felisa Rose is an over the top tyrant producer who will go all the way to make this documentary a success.

Rootwood goes back and forth from traditional narrative story telling with integrations of documentary scenes.  There are great aerial drone shots of the forest and the city.  There is little gore or jump scenes, but the movie attempts to build tension. I appreciate the practical effects that are used, and we do get to see a creature!

I could have done without the pop scenes in the beginning of the film and the montages.  This kind of killed the vibe of the movie for me in the beginning.  Once the actors hopped in their nice RV and head to the forest I was interested again and excited to be scared.  Unfortunately, I saw the actors take more rest breaks and drink water then exploring.  When they would find something, they would freak out and stop for the day. The set-up scares didn’t really work for me.  The only time I felt invested was when Jess was running for her life.  I can’t stress what a great believable job she did. Right when I thought the movie was climaxing and I was excited by the twist, the movie dragged on for another twist that just was over the top and fell short for me.  Had they stuck with the original, I would have been in and left with a more positive review for this movie.  But it doesn’t end here, there is one more twist as the credits roll. (That’s a lot of twists) Tyler Gallant’s acting at the very end was great, that is the character I wanted to see during the rest of the movie, which makes me wonder if he was putting on an act throughout. The trailer for Rootwood is captivating and I wish the movie would have carried the same vibe. I think hard core fans may want to check this out, but casual movie goers may not be as into it.