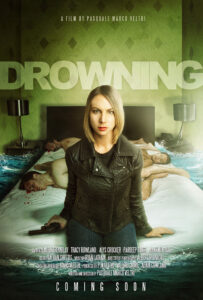 Laura Tremblay (The Expanse, Lifechanger) stars in the slow burn, Drowning. Anna is a sex worker who is abused and manipulated by her boss, Marcus (Mark Nuttall) who will not let her out of the business. Disconnected from her emotions, internal rage and anger gets Anna in trouble leading her to her childhood home where it is revealed she was sexually abused by her uncle as a child.  Her mother and sister do their best to be a solid support system while Anna attempts to break free and take control of her own life.  Anna must confront her enablers, abusers, and her own demons.

Drowning is described as a psychological horror but falls short of this desired description.  It is more of a chaotic mess that misses the mark.  The screen cuts can be abrupt and the repeated black and white flash backs are unnecessary and get boring after the fifth or six time.  There is a good story to be had and the focus of the film should have stayed on Anna and her struggle to gain control of her own life.  Instead, the movie watcher feels as detached and confused as Anna is.  Here is a story line about a lead character whom has dealt with sexual and physical abuse her entire life, this is enough to make her sympathetic, however, I did not feel that way.  She is unlikeable and just when I want to care about her, we get another boring rinse and repeat flash back.  Another distracting concept the director does is have Anna shoot her abusers throughout the movie so by the end, the viewer doesn’t even know what is real or not.  Unlike other movies who like to leave endings up for interpretation, I don’t believe that was this movies intent.  I think the director was trying to be metaphorical, but it just didn’t work for me.

The tittle of this movie is appropriately named, as our character is drowning in her own trauma and personal destruction as she attempts to find healthier coping mechanism and stops using “pretend” as her defense mechanism in response to the life she has been living. Anna is clearly shut off from her emotions, except for anger and aggression which is a very common reaction when one is dealing with trauma.  We see how Anna is unable to fit in “normal” society and social situations.  Which shows how isolated and controlled her life has been in the sex world.  Anna longs to blend into the sea of faces living their mundane life but she does not believe she belongs there.  As the movie progresses, we see her finally come out of her shell and begin to express herself to others.

There are two goofy and poorly represented detectives who try to get Anna to help them take down Marcus.  However, she is not trusting of authority and is on a mission to take care of people herself.  This movie walks on the border of being a revenge film and with the way the character was developed, it would have been more interesting had they made Anna either go on a crazy killing rampage or had her reach her stride by seeking revenge against her abusers in a bad ass way.

I didn’t mind watching this movie, but I just felt that it fell short and disjointed. The only thing that didn’t feel like a stereotype in the movie was Anna’s supportive mother.  I was expecting arguments in their screen time but instead, she was quiet and patient and you could feel her remorsefulness for past mistakes.  She was a mother who just wanted to be there for her daughter in the present.  I could list a number of things that annoyed me about this movie but I’m not looking to deconstruct and destroy someone’s work.  I guess I keep harping on this because I believe this movie could have been so much more than what it was and that disappoints me. Either way, this movie was fine and if I had to rate it, I would give it 2 stars but that maybe slightly generous.