Well, it’s that time of year again. The time for year-end lists and New Year’s resolutions. Everywhere you look, people are posting their top ten this and that of the year, but after all the great stuff I watched this year, I couldn’t narrow it down to just 10, so you’re getting a list of what I think are the 13 best indie horror movies of 2019. 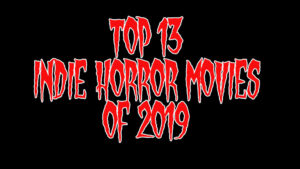 You can’t swing a dead cat without hitting an eighties throwback movie lately. Much like horror flicks that were actually made in the eighties, they range in quality from great to “how do I get that hour and a half back?”. This is one of the good ones. It has some killer practical effects, some good performances and killer cinematography along with a really cool plot. The thing about this one that I like so much is that it has the spirit of a retro flick while still being set in the modern time. That delicate balance took is what really pushed this movie into my top ten.

A Record of Sweet Murder

Okay, so this movie was made in 2014 but it got a US release this year. Also, this is my list and this movie was fucking incredible. This movie is everything you could want out of a Korean/Japanese horror flick. It’s tense, subtle, and prone to sudden violent outbursts. The makeup effects are fairly realistic and the overall story is really beautiful. It may have been made a few years ago but it is still one of the best indie horror movies of 2019

I love Hellarious so much. I originally checked it out because it’s a collection of shorts that features my all-time favorite Lunch Ladies. Clarissa Jacobson gave me the heads up about it and I watched it as soon as I could get my mitts on it. Holy shit it’s good. Do you remember way back in the day when we would buy albums without streaming them first? Like, you would go pick up a CD just because you liked one song and the whole album turned out to be phenomenal and it didn’t leave your CD player for like a month? This movie is kinda like that.

Man oh man. This is what happens when a cool fake grindhouse trailer gets turned into a whole ass movie. It’s got the look, feel, and spirit of a campy grindhouse flick. The only thing it lacks is the sleaze. Even without sex and nudity a movie about a priest who turns into a ninja-killing dinosaur is enough to push this flick one of the best indie horror movies of 2019.

6 Hot Chicks in a Warehouse

Hot girls in sexy outfits are locked in a cage and forced to fight for the amusement of a sadistic photographer. There’s plenty of eye candy, blood, violence, and sleaze to go around. This was an obvious choice.

This is another one that is a few years old but just got a US release. This one comes to us from one of my favorite distribution companies: Artsploitation Films. They put our some of the best stuff. This one is a bloody, violent, sexy revenge film. The awesome sauce on top of it all is that some of the special effects were done by Scotchworthy Productions, home of two of my favorites from last year Skeletons in the Closet and The Rake.

High on the Hog

It’s a crime film featuring Sid Haig as a pot-farming good ol boy who takes in abused women. They form a tight-knit family and work the giant weed farm.  Sid’s performance in this film is amazing; he plays a warm, loving, and protective father figure. High on the Hog is worth watching just for that. To boot, Ellie Church plays the stoned topless radio host who makes stoner puns and delivers exposition while being incredibly sexy.  There’s no way this movie wouldn’t make my list of best indie horror movies of 2019.

Look guys, it’s a movie about a wise-cracking carousel horse who comes to life and kills people. It’s bloody, hilarious, and there’s a human/carousel horse sex scene. If you haven’t seen this one yet, you need to do yourself a favor and check it out.

There’s no way I could put together a list of my favorite indie horror movies of the year and not include this one! It’s a horror sex comedy and contains all of those things in almost equal measure. The story is solid, the jokes are pretty good, and the practical effects are well-done. Go check this one out as soon as possible.

Where would any indie horror list be without the inclusion of Chickens Blood? It’s a gore-spattered horror flick from right here in the great state of Tennessee. There’s even a little humor and some meth sprinkled in for good measure. Seek this one out and watch it.

Somewhere between WWII movie and haunted house horror movie, this one finds its frozen home. A couple of Nazis escort a Norwegian POW through the frozen Nordic landscape and take shelter in a big abandoned house. There’s more to it than that but I don’t want to give anything away.

The Man Who Killed Hitler and then The Bigfoot

I expected this one to be a full on exploitation romp. What I got out of it was a really mellow character study starring Sam Elliot as a man who assassinated Adolf Hitler and later in life is contracted by the government to, you guessed it, hunt and kill a bigfoot. The story is great, the performances are top notch, and the cinematography is beautiful. I can’t recommend this movie enough.