Red Handed is an Occult horror film full of family secrets that span generations. Director Frank Peluso brings a tale of the Moloch to current times.  The myth is that the first born is offered to Moloch, the demon God of Canaan, to ensure a favorable harvest.  Not all children perished, others were forced to drink from his chalice then marked by the fangs of the serpent and kept alive.  The ritual occurs when the child is six years old.

The original rift begins with Lou (Michael Madsen) and his two brothers, Reynolds (Michael Biehn) and Dale (Rick Salomon) when they go to the Oregon River Valley.  Some mystery occurs with Lou’s son, Pete (Owen Burke) at the hands of his uncles while there.  Due to this incident, Lou does not speak to his brothers again.  Years later, Lou is murdered, and his three sons, Duffy, Gus and Pete take him down to the same Oregon mountain river to spread his ashes per the suggestion of Uncle Reynolds.  Duffy and his wife and 6-year-old son, Gus and his girlfriend along with Pete, stay at their Uncle Reynold’s home and meet the adult nieces of Dale.  As the uncomfortableness and secrets ensue things do not add up with these people.  After they arrive, Duffy’s son goes missing and Pete starts to remember his abduction 30 years ago, but he has blocked it out of his mind.  Only by recovering the mysteries inside his subconscious, will they be able to find the child. 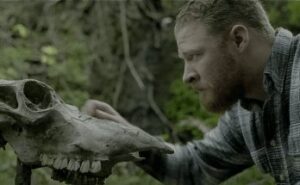 There is an unsettling feeling that is experienced while watching Lou’s brothers.  Characters are not who they claim to be and hold secrets close.  The mysteries of the characters keep the viewer guessing.  There are twist that are uncovered towards the end of the movie that answer questions developed prior.  Overall, everyone gives a good performance, some better than others.

The son, Louie, is an eccentric Harry Potter fan who is charming.  Pete is a troubled character that you have empathy for as he goes through unveiling his trauma.  The aerial views throughout the movie are lush and stunning.  The director captures some interesting camera angels that were a beautiful touch.  For viewers into occult and family secrets make sure to put your phone down and pay attention while watching this movie.