He we are, the second to the last episode of the season.  AHS: 1984 episode 8 ‘Rest in Pieces’ is working its way to the final girl.  The trope coined in the ‘80s, even though we saw it in ‘70s horror (Texas Chainsaw Massacre, Alien and Halloween to name a few).  As absurd as this show may be having Ramirez, Jingles and Bruce all in one setting, this is what we expect from the show and it has been fun.  The current season of AHS has managed to stay on point and circle back around to the central theme of Camp Redwood.  This is more than can be said from past seasons.  Before the last episodes ends in a potential roaring bloodbath, let’s take a look at what occurred this week.

It is one day before Halloween in 1989 and Donna and Brooke are enjoying coffee at a café discussing the endless possibilities for a future life as soon as Margaret is dead.  Donna tells Brooke to eat up because she is going to need her strength to end up the victorious final girl.  Brooke spending the last half of the ‘80s in jail needed to be schooled by Donna on what that meant.  Donna also talks about how ‘black people get killed off first” so she can’t be a final girl with her.  (‘Black Noire’ on Shudder, does a nice job covering the history of African Americans in horror).  In the middle of their discussion a National Enquirer reporter name Stacy (Stefanie Black) noses her way into their conversation and booth.  Stacy rambles on about the festival, serial killers and how she is writing a book about Jingles.  Oh, and she tells Brooke how she looks like that killer from Camp Redwood who was executed…Brooke.

Back outside the camp on the road, an injured Jonas is luring a car to the camp by hitchhiking.  A car stops and it’s Bruce, since they are going to the same place he tells Jonas to hop in.  Discussing music and jamming to classic rock, Jonas hears a woman moaning and pounding in the trunk.  Flashback to the night before when Bruce was still tied to the poll on the side of the road.  A saleswoman in her Mary Kay pink Cadillac, stops to assist or highway killer.  Bruce thanks her by shoving her into the back of the trunk.  Back to the present and Bruce wants one good reason he should let her go.  The sales lady is not making a good pitch for herself, so Bruce stabs her.  When he returns to the driver side of the car, Jonas is going.

Meanwhile on the tour bus of the mutilated band Kajagoogoo, Margaret is yelling at a nervous Courtney for not telling her this immediately.  Courtney is ready to call the police and have the camp shut down, but Margaret has other plans.  She instructs him to chop up the bodies, dispose of the them and bleach the shit out of the bus so it sparkles.  Reluctantly, he complies. Before finishing, Courtney hears the sweet sounds of the song Too Shy.  He explores and finds the ghosts of Kajagoogoo having a jam session.

At another part of the camp, Ramirez is spying on the set-up crew and hopes to land some jewelry but is given a guitar pick instead.  The roadie asks which band he is with and adorning a carved pentagram on the inside of his palm, Ramirez replies ‘I’m with Satan”.  Cool bro. Ramirez is back in the woods, air guitaring to Billy Idol when he is suddenly tackled by Richter.  Thank god, that was painful to watch.  Ramirez confesses to killing Richter’s wife to get him back to the camp.  Richter exclaims that he is going to end Ramirez and the camp before rolling around and going down a hill into the street.  Richter is suddenly hit and tossed like a thick flapjack by a pink Cadillac.  Bruce steps out of the car and fan boys out on Ramirez.  After bragging about his six soon to be eight kills, Bruce offers to help Ramirez find and kill Richter.  Ramirez professes that he is not trying to kill some chick because he is hunting big game.  I don’t know Ramirez; a few women continue to get away from you.  Ramirez performs another ritual and asks Satan to show him the way.

Back at the hotel of Brooke and Donna, Stacy is pounding on their door and not giving up.  Stacy knows who they are and tells them to come to her room and she will explain how she knows.  Stacy has the low down on both ladies but wants to know the connection between the two of them.  Brooke tells her it’s about revenge, so they negotiate a deal.  Brooke offers to tell her every detail and show her each place they occurred at the camp.  Deal on.

We have a small tender moment between Montana and Trevor in bed.  Montana is going over all the things she can feel and experience being dead, along with the things she cannot.  She then reveals her plan for the festival.  Our knight in shining armor, offers to stay at the camp so he can be with her because he loves her and the camp.  As the two love birds exit the cabin, Margaret is watching.

A little later, while in a clearing in the woods, Trevor says he will kill himself so he can be with Montana forever.  But Montana confesses that she is a monster and was the one that brought her ex-boyfriend, Ramirez, to the camp.  She then goes on a self-pity rant out of nowhere and tells Trevor that she does not deserve happiness. She continues how women are treated differently from men and because of this, she is called a villain.  She then pushes Trevor away and tells him to get lost for good.

Over to Bruce and Ramirez frolicking through the woods together looking for Richter, Ramirez whines how he wants to kill Richter at the camp.  He is pissed that Richter betrayed him and fucked up his plan to be killa 4 life. Xavier appears and takes the two to Richter’s physical buried body.  The ghost of Richter appears and stabs Xavier from behind.  Bruce is confused by seeing two Richters, he needs to catch up.  Richter informs Ramirez that he killed himself.  Amused, Ramirez reminds him that he tied to the camp so he can now go jet set off to Alaska and kill his son.  Margaret shows up and shoots Richter.  She tells the boys that she has a plan and she needs all the killers she can get.

Next, Stacy was able to sneak Brooke and Donna into the camp.  While on their tour, Brooke has a plan to take Stacy to the shack to kill her.  But Margaret and her boy toy killers may have other plans.  While in the shack, Brooke reveals to Stacy how Donna was working with Jingles but to keep it on the down low and save it for the book.  Brooke tells her to close her eyes so she can have the full immersive experience as Brooke walks her through what happened to her.  But that is just a ploy to take a knife to her throat.  Before Brooke can do this, Donna tackles Brooke and tells the bitch to run.  Donna wants Brooke to stay good because the darkness that is inside of her will take over if she gives in.  As Stacy is running for her life, she runs into our trio, Bruce, Ramirez and Margaret.  She dies.  Bruce excitedly tells Margaret that he is down for killing.  Margaret has bigger plans.  She wants to kill every musician (except Billy Idol) at the camp so people will flock to it like Jim Morrison’s tombstone.

Montana and the ghost gang have tied up Richter who is asking to be let go so he can kill Ramirez.  But no one wants his ghost at the cam, so there is no way they are untying him.  Trevor and the faux Jingle townies take a tied up Richter to the doc and begin stabbing him.  They want him to die slowly and roll him onto a small rowboat.  For any of you Friday the 13th fans, I think you know where this is going. As Richter is drifting in the lake, a decomposed small body comes out of the lake and pulls Richter in.  We then see Lavinia and a rejuvenated Bobby (Richter’s brother) having a picnic by a lake.  We get the feeling that this may not necessarily be in the realm of Camp Redwood, as it feels more peaceful.  Lavinia seems to be content and happy since Richter brought her younger son back to her.  Richter tells his mother that he does not deserve this because he has failed his son.  But his mother is impressed he has made the ultimate sacrifice.  Richter does not know how he can stay in this place and be at rest.  Lavinia tells him the past will haunt you if you let it.  Bobby looks at his older brother and says, “stay with us and nothing will hurt you again.” But can Richter let go of his revenge to kill Ramirez in hopes of protecting his son? 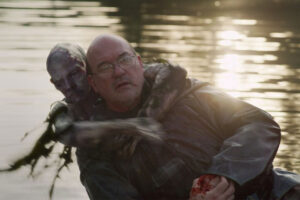 We will have to wait for the final episode to answer our pending questions.  Will Richter stay with his mother and brother or will there be a final battle between him and Ramirez.  Gives me a Freddy vs. Jason vibe.  Will all those that are lingering in purgatory finally find peace and be able to leave the camp and what will it take? Will Brooke be our final girl with the help of Donna?  Will Margaret be victorious and get her money-making festival massacre?  We have less than a week till we find out.