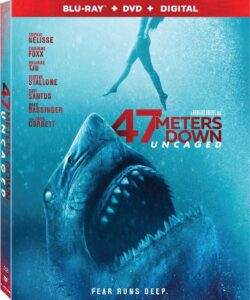 47 Meters Down: Uncaged took the true life Yucatan cave system discovery and ran with it.  The cave system was originally thought to be disconnected, but in 2018 The Great Mayan Aquifer Project discovered that the two underwater cave systems where actually connected.  They also found Mayan artifacts including bones and pottery.  Just a little fun fact for the readers.

Director Johnannes Roberts, who also directed The Strangers: Prey at Night and the original 47 Meters Down, continued with this follow up that is not related to the original.  Grant (Corbett) moves his high school daughters, Mia (Nelisse) and Sash (Foxx) and his wife Jennifer (Long) to Yucatan, Mexico where he is working under water on the Yucatan caves at the heart of a Mayan ruin.  Life appears to be challenging for Mia, whose mother has died, she does not get along with her step-sister and is bullied at school.  But as the movie progresses, the sisters resolve their issues quickly.  What was supposed to be a bonding trip set up by dad at a great white glass bottom boat ride quickly changes when Sasha’s two friends Alex (Tju) and Nicole (Stallone) come rescue them.  The four girls go to one of the Yucatan caves on the other side from where the girls’ dad is working.  Nicole and Alexa want to take the sisters to the underground Mayan ruin where the rest of the movie will take place till the end.  The teenagers soon find out that they are not alone; in fact there are blind albino great white sharks that have adapted to the cave’s environment.  Once their entrance becomes closed off they have to find a way out through the labyrinth of pathways and the sharks are not their only obstacle.

One thing I appreciated about this movie where the four female characters.  It reminded me of The Decent without the need to be an adrenaline junkie.  When each of the ladies were faced with a new fear, no matter how scared they were, there was always at least one friend that could stay focus and bring the group back around.  They were all fighters and didn’t give up their will to survive.  Now this may seem like a no brainer, but usually in movies there is one character who can’t handle things when they go sideways, but these girls were fighters.

The key to this movie was tension and the director gave it to us in many ways.  Visually, the vast underwater darkness which is enough by itself to terrify most people, was isolated and eerie.  The only time we see light is from the flash lights.  Three colors were used, green, yellow and red and this worked very well.  The viewer gets a sense that this is uncharted territory and they are truly away from civilization. The director also tricks us into thinking the girls are safe in this gorgeous land full of palm trees and mountain cliffs.  It looks like paradise.  I was ready to buy my plane ticket.

The other form of tension building used was audio.  When Mia becomes terrified all you hear is her heavy breathing and moans.  You can feel the fear coming from her mask.  The use of audible alarms with flashing red light signaling when a diver is in trouble, similar to what firefighters wear, was used to signify warning.

A major tension builder was the maze of tight narrow cave paths.  Not for those who are claustrophobic.  Another factor to contend with was the ever dropping of their air tanks. After each hurdle they encountered they would do an air check which only put more pressure on them to find a way out of the caves.

And if all this was not enough there were sharks.  The sharks would come and go and the viewer never was quite sure when they were going to show up.  The fact that they were not supposed to be there in the first place but adapted added to their creepiness.

Overall, this was a solid fun movie that kept the tension going all the way till the end.  There was only one scene towards the end that felt Hollywood and out of place with the feel of the rest of the movie, which I was disappointed that the directed chose to do this.  However, everything else was nail biting.  I would definitely recommend you guys give this one a watch.