Hellmington tells the story of Detective Samantha Woodhouse as she investigates her father’s dying words. The last words he spoke to her were the name of a girl who went missing in 1999. As she digs into the cold case, she finds that everything is connected to her.

Sam Woodhouse is a veteran detective with a complicated past. She thought that she could leave her estranged father and small town past behind her. She is called back to her hometown to make funeral arrangements for her father and finds herself in the middle of a mystery that goes deeper than she could have ever imagined. The closer she gets to the truth, the more lies she uncovers.

I’m not going to get any deeper into the plot because I don’t want to spoil anything. Hellmington is a tight little thriller with some solid twists. You’ll want to check it out for yourself. There’s plenty of other stuff to talk about, though.

If you’re a regular reader of my reviews, you’ll know that it is rare that I mention the score of a movie. The music in this one hooked me from the beginning. It opens on a dissonant track with a metric shit ton of distorted bass. For a moment, I thought that the speakers in my surround sound were blown. It wasn’t something that you can tap your toe to, but it was effective as all hell. It’s the kind of track that sets you on edge from the beginning but in a good way. I said to myself, “if this track sets the tone for the film, it’s going to be one hell of a ride”. It did and it was. The score throughout the film was solid but it was this opening track that pops up from time to time through the film that really grabbed me.

The acting in this movie was really solid. Not just from the leads but from the supporting characters as well. The handful of main characters give some standout performances, though. 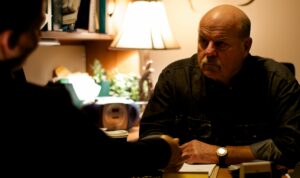 Michael Ironside (Starship Troopers, Scanners) brings the character of Rupert Woodhouse to life. He is a grizzled small town cop and Sam’s uncle. Over the years, he was forced to play middle man between Sam and her estranged father. In the film, we see him mourning the death of his brother and trying to look out for Sam. He’s a gruff old bastard but he seems to really love his niece. 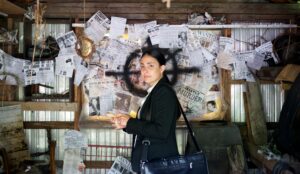 Nicola Correia-Damude (Shadowhunters) kills it as Detective Samantha Woodhouse. She’s a complicated character with a back story to match. In the years prior to the events of Hellmington she lost her mother and her young daughter. As the movie begins, we see her estranged father die. Her past has hardened her and the ordeal she finds herself in threatens to batter down her external walls. We see her flaws, weaknesses, and secrets laid bare along with her strengths. We need more characters like Sam Woodhouse.

The nuts and bolts elements of Hellmington are just as good as the characters and plot. The cinematography is really nice; the lighting is damned near perfect. Even in the scenes that are set in dark places, you can still see what’s going on; that’s a big deal for me. There’s nothing worse that staring at what is basically a black screen with noises coming out of it.  There are a couple of scenes with some really surreal lighting that reminded me a bit of Suspiria; kudos to the creative team that pulled that off. 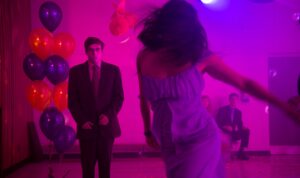 The story in this film is so cool. It’s pretty common to not know any more than the protagonist in a thriller. What I found interesting about Hellmington is that the audience knows even less. As things are revealed to Sam, we see bits and pieces of her past. There are a handful of really cool twists that you don’t really see coming until they slap you in the face. By the end of the film, Sam is reeling in the knowledge that so much of her life had been built on lies and misunderstandings. The conclusion is just so fucking cool. I won’t give it away but I will say that it gets really deep really fast.

All in all, would I recommend this movie? Definitely.  It’s a cool story with some solid well-developed characters. There’s a rape scene but it’s really mild but if that’s something you can’t handle, you may want to avoid this film. That’s seriously the only reason to not watch Hellmington. You’ll have to wait til September to get your hands on it though. Hellmington will be on VOD and DVD from Wild Eye Releasing.