Artik tells the story of a comic book obsessed serial killer who teaches his son how to get away with brutal murder. Things go awry for the isolated family when the boy befriends a local mechanic who threatens to expose everything. 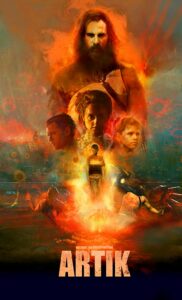 I’m going to try to avoid major spoilers here. I’ll probably end up giving a couple things away but I won’t be breaking down the entire plot. So, with that being said let’s get into the movie!

The Duality of Artik…

Artik has a really cool look and feel. Let’s put it like this: if grindhouse style got arthaus really drunk and knocked it up by a dumpster behind a club where some local punk band was playing the weird baby that resulted would be Artik. The film strikes this insane balance between gorgeously shot and gritty.

The practical effects are pretty damned good as well. There’s a enough blood and gore to keep things interesting without ever going full on splatter flick. The kills are much the same way. They’re brutal enough to set some viewers on edge. At the same time, enough is done just out of frame that it never really crosses the line into ultraviolence. Again with the balance.

One of my favorite things about Artik is how well-written these characters are.  Each of the main characters feels like a real person with an interesting history. Each of them hint at a past that forged them into the people they are at the time of the events of the film. This is why Artik is able to remain engaging even though the “isolated serial killer family” thing has been done a million times. 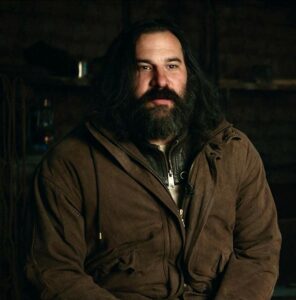 You know those villains who are just ultra-suave and brutal at the same time? This ain’t that. Artik, the aforementioned serial killer, is kind of an awkward introvert. He just happens to be a mountain of a man with a fucked up mind and a short fuse. For most of the movie he is either killing, torturing, giving super villain style monologues, or drawing his own comics.

The antagonist, much like the film itself, is layered. He this huge guy with a mean streak a mile wide but he’s also an artist. He has this fantastical view of the world that I guess, if we’re being fair, we could call a massive murder-fuelling delusion. He applies this artistry to his kills and his torture techniques. He understands how to strike where it truly hurts whether he is using a hammer or his mind.

Ol’ Artik isn’t out there on his farm all by his lonesome, though. He has a wife who is just as fucked up as he is. She’s literally in on the whole operation. I don’t know if it was just a case of two psychos falling in love or if it’s Stockholm Syndrome but they seem happy   At the very least they’re fucking on the regular. This is evidenced by the whole litter of boys who live in the barn and work the fields. It isn’t explicitly shown if he teaches all of them to kill but most of the film’s narrative is based on one of the lads. His name is The Boy Adam or just The Boy for short.

The Boy Adam is more introspective than most of the other kids. He seems like he’d be just a normal-ish kid if he wasn’t born into a family of fucking nutcases.  He is an extreme example of nature versus nurture. We see him struggle with what he knows is right and what his father has taught him. This constant inner struggle leads Adam out of stock creepy kid territory and makes him an interesting and integral part of the story.

I just want to tip my hat to writer/director Tom Botchii Skowronski. When a film can take an aggressively optimistic straight edge kid and make him a likeable character, I have to give props to the writer. If you’ve ever met one of those dudes you know that they are usually overbearing and preachy. Holton has his moments but overall he isn’t a giant dickhead.

In fact, Holton is pretty fucking rad. He was the child of alcoholics. He saw how substance abuse wrecked his family life and uses that as motivation to never walk down the path of his parents. He sees mind-altering substances as a gateway to the land of failure and stagnation inhabited by his parents. He also has a big heart when it comes to neglected and abused children;  this is how he gets mixed up in this whole crazy story in the first place. As the story progresses, Holton shows himself to be a real badass.

Would I recommend this film? Definitely. Artik is a brutal ride through the dark parts of humanity. At the same time, it’s not going to leave you feeling empty or scar you for life. It has a genuinely creepy villain and a protagonist that you can root for. It looks good, the performances are solid, and the soundtrack is badass. If you’re in the mood for something tense and bloody you can rent or buy Artik on just about any VOD platform.