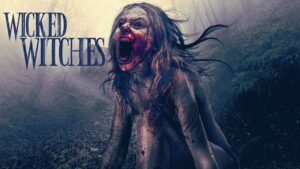 Wicked Witches tells the story of a man who has recently split from his wife and decides to pick up his old life of drinking, drugs, and debauchery. When he and his friends decide to party on an old farm, there is the arrival of a group of women who are more than they seem. They are witches. And they are out for blood.

From the opening shot of Wicked Witches, viewers know right off the bat that lead character Mark is in the midst of a major life change as he is shown removing his wedding ring. What has happened isn’t made clear right away. Instead, during a succinct first act, a series of small clues reveal the current state of his character and sets up what is expected to be a highly emotional arc.

A lot of people will argue that there is very little to like about Mark’s character. But, with effective acting from Duncan Casey, we get glimpses into the inner turmoil that is raging inside his heart and mind. Mark has made a mistake, and he knows it. He is emotionally wounded because of his own doing, and a good portion of the film is him reacting to what he’s done.

Mark is at a point in his life where he is torn between two realities, that of being a family man or slipping back into the hard partying lifestyle of his past. This juxtaposition is not limited to characterization; the cinematography and music also serve a purpose. Abrupt and jarring edits between the countryside and cityscape, along with wide ranging music, puts viewers in the mindset of being on the cusp of two paths that are at odds with one another.

The look and makeup effects on the titular witches are effective, but, unfortunately, none of them come across as being all that original. I got a Jennifer’s Body feel from the witch designs. Despite the fact that it feels like we’ve seen the “monsters” before, the witches are still interesting since they can be viewed as a metaphor, and the blood and kills are over the top and will give gore hounds plenty to love.

On several occasions, while watching Wicked Witches, I was reminded of Ari Aster’s latest, Midsommer. It’s not only the fact that both films feature nightmarish scenes set in open fields during broad daylight, but they each involve the themes of breakup and/or emotional trauma.

SPOILERS AHEAD! When it comes to Wicked Witches, there is plenty to analyze and dissect about the character of Mark. Which version is his true essence? Is he being sincere during the finale when he’s driving back home? Or is he only desperate for escape and doesn’t know where else to turn? The movie features a final shot that comes across as a Tales From the Crypt “punch line” type of ending and suggests that Mark has made his bed and now he has to lay in it. END SPOILERS

I actually like the fact that a lot about Mark is open to interpretation. However, I was a bit let down that some other things about the movie, a few plot devices in particular, are left unclear and underdeveloped. Other than the lead, the screenplay leaves the rest of the cast as one dimensional stereotypes. There is somewhat of a twist near the end that falls flat because of the vagueness in that aspect of the screenplay.

Despite a few setbacks along the way, I enjoyed Wicked Witches. All in all, the movie is indie horror done right, and it is one I’d recommend.