For a long time now we’ve been hearing this and that and the other about a possible Nightmare on Elm Street franchise reboot — and not just a remake, mind you, like that back-alley D.C. comics-style abortion of a remake staring Jackie Earle Who Gives a Fuck (okay, he was pretty good as the racist shithead kid in Bad News Bears), but a total commitment to starting from scratch (pun intended) and going all the way. Well, those rumors were once again stoked by Robert Englund’s tacit approval of not only a franchise reboot, but of his possible replacement: Kevin. Motherfucking. Bacon. At this year’s Monster Mania in spooky Philadelphia, Robert Englund, who portrayed Freddy Krueger in every Nightmare flick until he was replaced by that guy who played Swirly-Face in Watchmen, admitted that while he might be game for one more trip around the nightmare block, he simply doesn’t have the stamina to do an entire franchise reboot. To wit, Mr. Englund said that he’d love to see Kevin Bacon take over the role. He didn’t really go into why, per se, citing only that he admired Bacon’s work in two other horror flicks, Stir of Echoes and Tremors. It’s as good a reason as any to endorse an actor to fill your freaky shoes, right?

Please Dear God Free Me From Prison That Is Frederick R. Krueger

I guess? I’ve always been a fan of Kevin Bacon and feel he’d definitely do justice to the iconic role. Despite his having been in three legit horror flicks (remember, kids, he was in Friday the 13th), and four if you count My Dog Skip (I do), I don’t really think I’d accept a pivot like this. Bacon is best known for either being an insufferable c-word (see Hollow Man) or a rather charming and affable staple of 80s rom-coms. I’d rather see him take a turn as a nothing-to-lose father going after the guys that killed his daughter in some indie A24 revenge porn than commit to a (possibly) 8-movie reboot of a beloved horror franchise. So, am I just being all “I don’t think he’s right for the part” or “maybe Kevin Bacon will die from eating all that bacon which is why his last name is Bacon sooner rather than later”? No. So why crap on K-Bac, then? 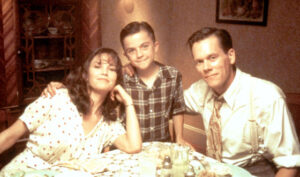 My Dog Skip, Kevin Bacon’s Most Terrifying Exploration of Horror

I want fresh blood. I want some talented unknown actor who can engulf and simultaneously be absorbed by the role, potentially for a decade or more. When they cast the new It did they say, “let’s get Gene Hackman — he’s talented and I bet he looks creepy in clown makeup!” No, they got some goofball named Bill Skarsgard (granted, son of legendary Stellan Skarsgard a.k.a. Stellar Skateboard) to fill the big floppy shoes of Tim Curry. Skarsgard had a few minor roles under his belt, but nothing that would prove, beyond doubt, that he was perfect to portray arguably the most iconic literary horror fiend of the 20th century. And guess what? Skarsgard fucking nailed the role like the Romans nailed…uh, well, you know what I mean. In short, I feel that despite his chops as an actor and status as a beloved entertainer, Kevin Bacon is…well…Kevin Bacon. Let’s start from scratch here much like the original producers of A Nightmare on Elm Street took a chance on casting as their lead villain the worse actor in Galaxy of Terror.