When it comes to meeting celebrities who have starred in your favorite genre films, bigger is not necessarily better. Knoxville, Tenn., fandom convention Fanboy Expo kicked off on Friday, Jul. 12, 2019, with celebrity guest headliners that included Paul Reubens, Richard Dean Anderson, and the horror community’s own beloved Bad Ash, Bruce Campbell. In recent years, the three-day event has featured more and more guests who frequently, if not exclusively, work in horror films. This year’s con occupied two separate buildings and crowds were enormous. Therefore, I was not able to meet every guest I wanted to meet.

For example, I didn’t even attempt to meet Bruce Campbell or Cary Elwes. They are such big names that Fanboy didn’t bother listing them under a specific fandom category on the guest list. Campbell’s horror cred is legendary, of course, and he is now hosting Ripley’s Believe It Or Not on The Travel Channel. Elwes’ horror cred includes Saw, the forthcoming remake of Black Christmas, Stranger Things 3, Bram Stoker’s Dracula, and more. On Saturday, both Elwes’ and Campbell’s lines snaked away from their booths and down the aisles of the con show floor. Elwes was in the main building while Campbell was in the second building, what Fanboy staff called “The W.” Had I waited for a chance to meet either of them, I most likely would have been standing in line in my sweaty Ichabod Crane cosplay for two hours or more and would have missed out on some more intimate and exciting interactions.

My first stop was David Howard Thornton, Art the Clown himself from Terrifier. Were Fanboy Expo strictly a horror convention, I do not doubt that access to Thornton would have been more difficult. The fact that Terrifier 2’s IndieGogo campaign fully funded within hours of its launch (and has more than doubled its funding since) is a testament to that. Thornton was pleasant, perfectly gracious with his time, and funny. He is also obviously excited about the forthcoming Terrifier sequel. If you get a chance to meet Thornton, you might notice that Art the Clown’s tiny top hat rests in a place of honor on the table in front of him, where Thornton has quick access to it for photo ops. 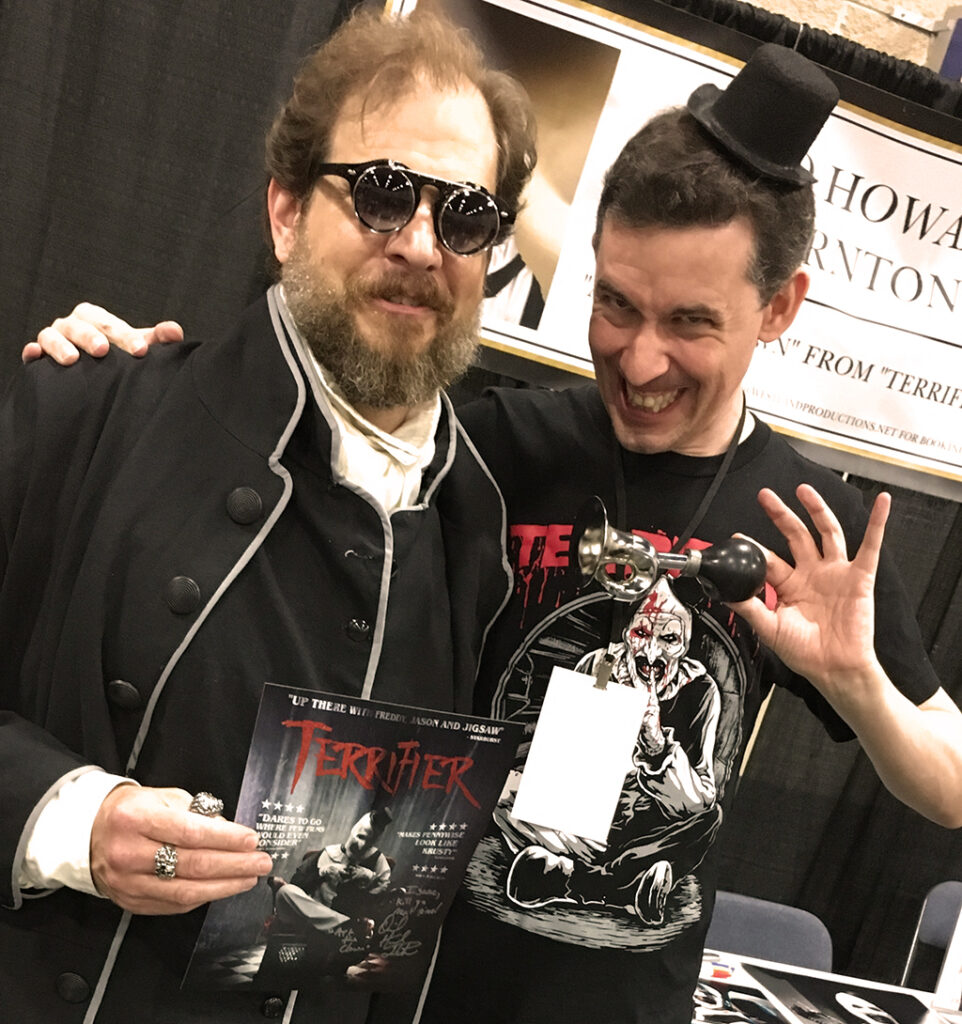 After Thornton, I intended to stop at Nick Castle’s (Halloween, The Last Starfighter, Escape From New York) table. Castle recently reprised his role as the original Shape from John Carpenter’s Halloween in the 2018 Halloween. At the time I first attempted to visit, his line was relatively long. I had other faces I wanted to connect with before my energy gave out on me, so I passed on the opportunity until Sunday. Like Thornton, Castle was pleasant to talk to and perfectly gracious. I made sure to tell him that Halloween is one of my all-time favorite horror movies and thanked him for the years of thrills I’ve experienced from uncountable rewatches. 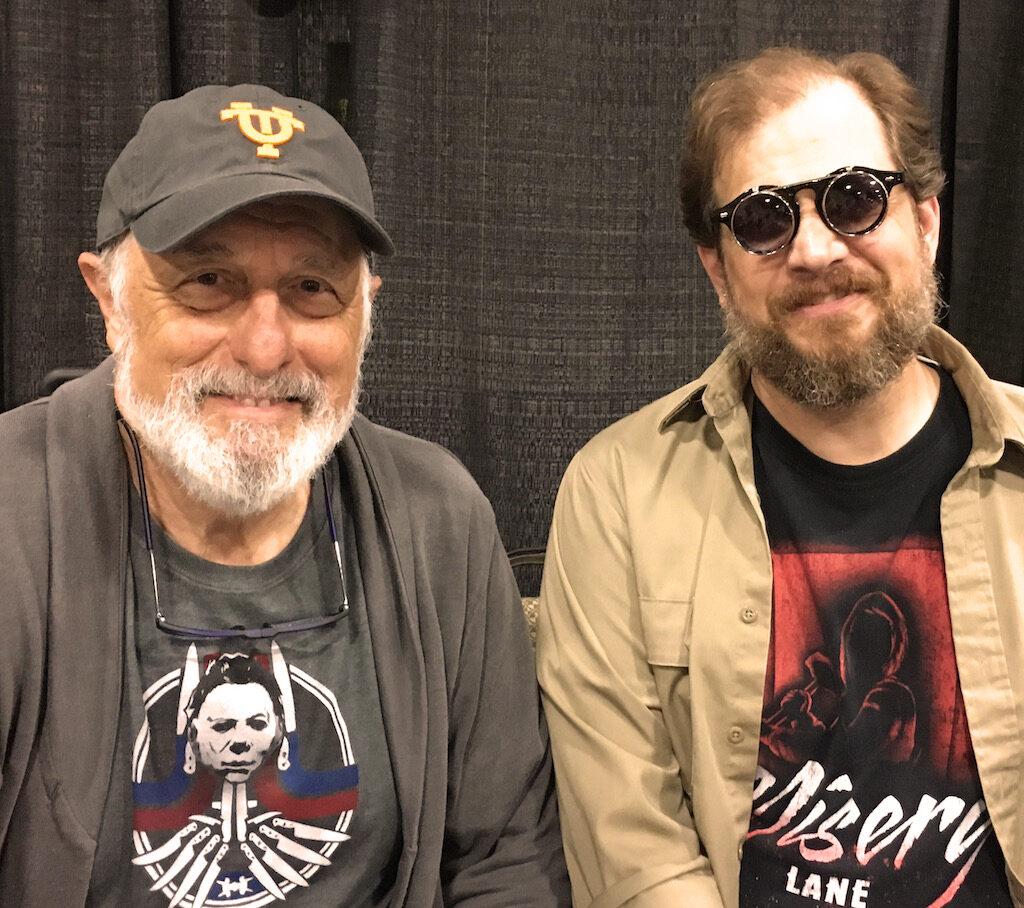 After I bypassed Castle’s table on Saturday, I walked around the perimeter of the show floor seeking opportunities to meet the other folks on my list. If their lines weren’t too long, they were either at panels or photo opps. I took advantage of the downtime to eat some lunch and shop among the show floor vendors. There I purchased the perfect accessories to my Saturday Ichabod Crane cosplay: a pair of extra steam-punky steampunk goggles and a walking cane with a dragon’s head handle. I noticed then that Jennifer Carpenter (Dexter, The Exorcism of Emily Rose) had returned to her table and a line had begun to form, so I raced over.

I’ve never seen Dexter, although I’m assured that I would enjoy it. The Exorcism of Emily Rose, on the other hand, is one of my favorite horror movies in the possession subgenre. It’s a unique combination of Law & Order-style crime drama and The Exorcist. Carpenter’s portrayal of Emily was terrifying (remember those contortions!) and empathy evoking. The actor herself was funny and charming. When I told her that my name was Isaac, she exclaimed that it was also her son’s name and asked if I knew that it means “laughter.” I replied that I knew, adding that my last name is Thorne and thus my name can be translated to “laughing prick.” She laughed, handed me my autographed photo, and as I walked away, said: “Nice to meet you, Mr. Prick!” It was awesome. 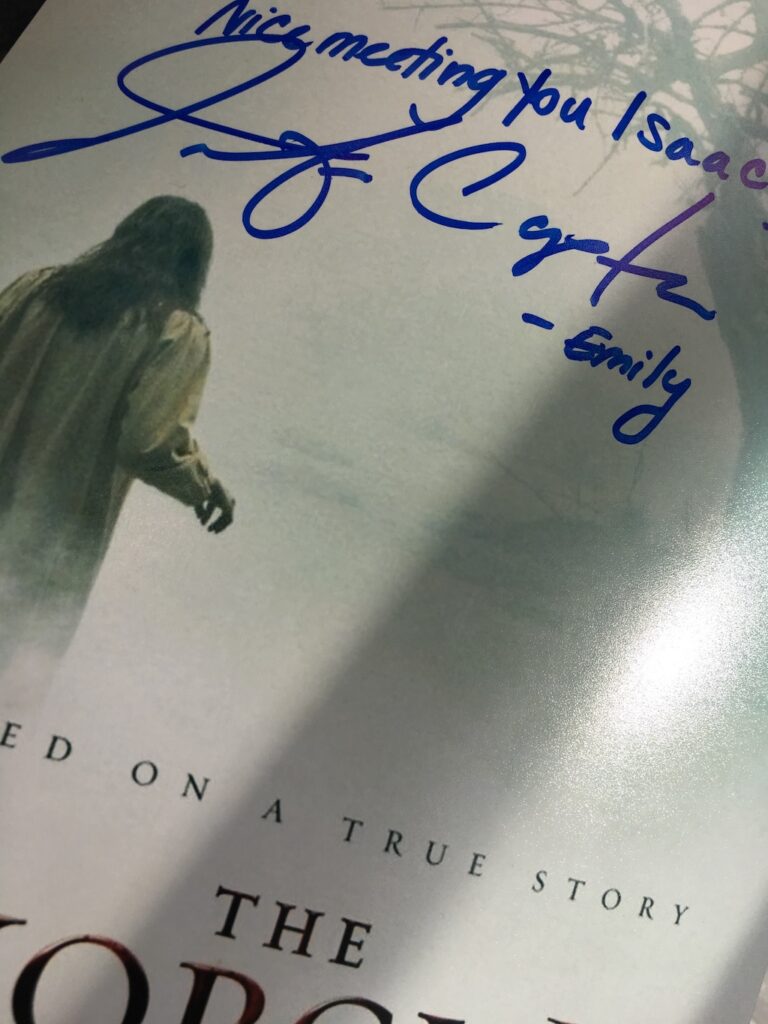 At least SOMEONE (specifically Jennifer Carpenter of THE EXORCISM OF EMILY ROSE) thinks Isaac is funny.

From Carpenter’s booth, I skittered over to try and meet John Noble (Fringe, Elementary, Sleepy Hollow, Dark Matters). Alas, he was not at his booth just then. Also, if I was going to be able to eat dinner that evening, I needed to curb my spending for the rest of the day (I went into this con with a budget, after all). I chose to wrap up my Saturday at the con after meeting Carpenter so I could live to con the next day.

My first stop on Sunday was Noble’s table. He was there, and the line was not at all outrageous, so I stepped up. Noble was a delight. He autographed a Sleepy Hollow print for me while we chatted about the epic nature of the first season (I fell out of the fandom after season 2). If I had to pick one person to narrate everything in the world from this point forward, it would be John Noble. After I visited Noble, I finally met Castle, as detailed above. Alas, at that point both my con budget and my energy were spent, so I called it a day and headed home. 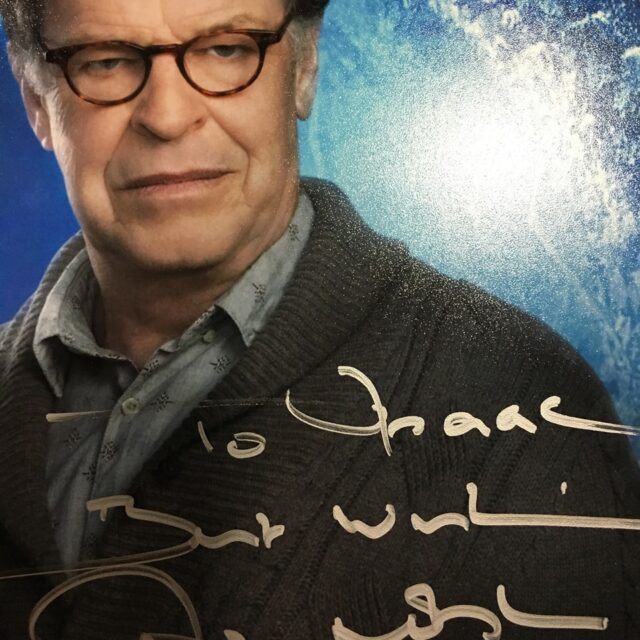 John Noble is so cool he could’ve simply narrated the ink onto this print.

Unfortunately, leaving the con just then meant that I did not get to meet the other horror guests at Fanboy this year. The ones I’ll have to catch some other time include Hellraiser’s Doug Bradley, whom I can’t believe I’ve not met yet. I checked his table several times but never found my prime opportunity to step up. I also missed Lisa Zane (Freddy’s Dead: The Final Nightmare), Cerina Vincent (Cabin Fever), and Roger L. Jackson, who did voice work for the Scream franchise. Fortunately for me, Fanboy Expo is not the only con I attend per year, and most of my other favorites appear elsewhere. So all is not lost.

I do hope that there will come a time when I can finally meet Campbell and Elwes. Perhaps they’ll do a smaller con at some point. Until then, I’ll say that the celebrities I did meet at Fanboy are much bigger than their name recognition.