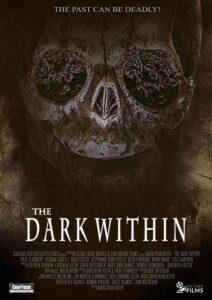 The Dark Within (coming to VOD in July) is the story of a young boy (Marcus) with seemingly psychic powers, who grows into a man tormented by demons.  His parents are dead, his ol’ lady took out a restraining order, and his psychiatrist has a ridiculous amount of involvement in and control over his personal life.

On the surface, The Dark Within seems full and robust:  it’s well-shot and cinematic, the general concept of battling inner demons which become very REAL demons after sipping on some of pop’s-psychic-psychedelic-demon-summoning elixir is solid, and the sense of isolation and madness created are clear and on full display.

But TDW isn’t full and robust.

Let’s start with the fact that this is a slow movie.  Not like a slow-burn either.  It’s like molasses.  It doesn’t move.

And for a movie about psychic-multidimensional demons that manifest from the ether after one consumes a magic elixir, that’s a huge problem!

Every time it seems like it’s about to pop, TDW kinda just fizzles.  That doesn’t mean it doesn’t have its moments. There are a couple of pretty exceptional scares and twists (#nospoilers), and some pretty legit practical blood FX (in fact I wish more of the FX were practical), but there aren’t enough of those moments to fill the 88 minute runtime.

I respect the fact that the filmmakers want to communicate isolation, separation, and the descent into madness…they want the audience to know Marcus is broken, desperate, and tormented.  I get it.

What I don’t get is the need to pad the run time with literally over 20 minutes of people walking around places by themselves, lookin’ at stuff with little or nothing happening to move the story forward.

The audience knows Marcus is alone and agonized.  It’s clear on every level.  Now let’s do something with that information!

So much time is spent walking down the hallway, or walking through the woods, or exploring inside the cabin, or exploring outside the cabin, or running in the woods…It disconnects the audience.  It isolates the viewer.  It makes you forget why you even care about Marcus.  It takes away from the battle with reality that Marcus is having. Ultimately, the convention used to create the ambiance kills it.

As the story progresses, Marcus’s descent into madness is highlighted by his inability to separate demon-visions from what’s actually going on.  Time looses all meaning. Nothing is what it’s supposed to be.  People are there who aren’t there.  Dead parents provide insight.  That wack-a-doodle psychiatrist shows back up.  9-1-1 is joke.  The lines become sufficiently blurred.  But again, all of this good stuff is spread so far out that it looses a lot of impact.

Now, it could be argued that if the filmmakers reedited and trimmed this down to a quick and dirty 30 minutes they would have a beast of a short.  Like a legit contender.

The only thing I’ll say about the ending is that it should have ended when it first ends.  Watch it and you’ll understand.  The audience is initially left with a true sense of victory, with Marcus finally taking charge of his own existence, his future, and his decisions. It’s fitting, and oddly satisfying.  Then…dissatisfaction.

I wanna end my first review for Tennessee Horror News with this:

Every movie that gets made and distributed (in any capacity) deserves some level of respect.  Art is subjective and I’m just a dummy with a laptop.  What do I know?

I didn’t love The Dark Within,  but you might, especially if you’re into long well-crafted shots of lone dudes walking.