Rondo is an Artsploitation release. If you’re not familiar with them, they bring a ton of great foreign films to the good old US of A. Having their stamp on the cover was enough for me to want to check this one out, honestly. What made it doubly intriguing is that it is an American film. I’m probably wrong but I think this is the first American film they have distributed. I knew there had to be something special in this movie.

Even though Rondo is a few years old, I am going to try to avoid major spoilers. If you want to go in blind, I will let you know now that I definitely recommend this movie. Go get you a copy!

We start with Paul. He is a young, troubled, alcoholic veteran who lives with his sister, Jill. Being the caring sister that she is, Jill finds Paul a therapist to help heal his wounds and get him off the sauce. Instead of suggesting any real psychiatric treatment, the therapist suggests that Paul have more weird sex and drink a little less. In fact, she knows a place where he can go to have weird, anonymous sex. It’s Paul’s lucky day.

After debating on it for awhile, Paul shows up at the address and gives the man at the door the password. What awaits him inside are a few other dudes and one young beautiful woman. 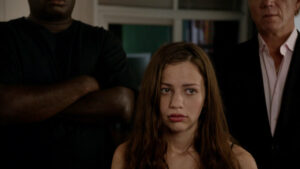 The organizer of the little shindig breaks down all the rules for the attendees. Basically, treat this woman like a fuckdoll and take pointers from her husband while he watches.

The guys are called in one at a time to fulfill the strange couple’s needs. While he waits, Paul steps out on the balcony to grab a smoke. It doesn’t take him long to realize that he is standing right outside the window where all the fucking is going down. So, like anyone in a weird situation, Paul takes a peek. 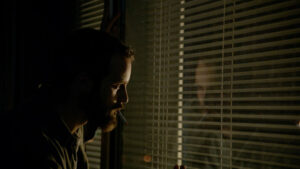 He witnesses one of the organizers murder an attendee mid-stroke. It’s not a clean murder, either. It’s a full-on sledgehammer to the back of the head kind of murder. These folks have seriously fucked up kinks.

Paul, not wanting his brains scrambled, high tails it out of there. After making it back home he has some very uncomfortable sleep and wakes up to a news broadcast. It seems that a few dudes were sexually assaulting a woman and somehow she was able to kill them before she too died. Paul connects the dots and realizes who the victims are and how they really died.

Then Things Take a Turn…

Paul tries to explain all of this crazy shit to Jill to no avail. She thinks he is just losing his mind again. She keeps thinking this until the organizers of the fuck club show up to murder Paul. 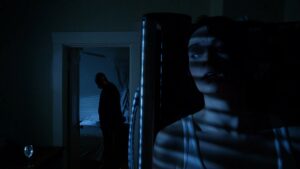 Jill is able to hide avoid them but she watches them murder the absolute shit out of her brother. Luckily, she was listening to all the details that he shared with her about the murderous fuck party prescribed by his therapist.

What follows is a sexy, engaging, and bloody tale of vengeance. I don’t want to give away too much about how things play out but I will say that the film climaxes in a series of slow motion machine gun executions.

Rondo strikes an incredible balance of humor, sex, and violence. It never goes too far one way. Even the ultra bloody climax, which I will talk about a little more later, was sexy as fuck. This balance makes Rondo a really engaging movie to watch. If you love sleazy films as much as I do, you know that it would have been super easy for this film to be a big ol’ naked bloodbath. That would have been fine with me but the final product was so much cooler.

You never get too in-depth with any of the characters. Rondo does, however, give you everything you need to know about each person in the film. Some are just perverts looking to get laid, others are a little more sinister, and some have some surprises hiding under plain exteriors.

I am a huge fan of the character of Jill. As with most revenge flicks, Jill is pretty mild mannered until she isn’t. She doesn’t turn into some kind of unstoppable nearly-supernatural badass, though. She also doesn’t transform into a woman bent on torture. Instead, she is an angry woman who only wants to exact vengeance on those who wronged her and her family. She’s tough, clever, and drips sex appeal. Jill is the epitome of the vengeful femme fatale.

I Need a Cigarette After That…

The climax is fucking awesome. I’m not going to give a ton of details but I don’t think it’s a spoiler to say that Jill gets her payback in the end. She grabs a machine gun and forces a handful of folks into what I assume is a basement or parking garage.

This is the one scene where Rondo goes over the top and it is a thing of beauty. As she prepares to open fire, the score goes silent and time slows. The only sounds are gunshots, bodies falling, and shell casings flying from her weapon. We hear and feel each bullet as it enters its target with a fountain of blood.

Usually, I am not a big fan of guns in scenes like this. I like to see the revenge done up close and personal with knives or something. The climax of Rondo blends the two. With the slow motion visuals and the silence it makes these executions carry more weight than you would expect.

All in all, would I recommend this movie? You’re goddamned right I would! It’s a sleek, sexy, violent revenge thriller. The acting, cinematography, and effects are all solid as hell. There are even a few laughs thrown in for good measure. Rondo is an accessible and fresh take on the revenge genre. You should definitely check it out. You can get a copy on DVD with some great special features from Artsploitation June 4th.