If you’re someone who waits in line to meet a celebrity at a fandom convention (I can’t bring myself to call them comic cons anymore), I hope you’re a helluva lot more graceful and dignified than I am. Last night, I had the honor of meeting the world’s greatest horror host and drive-in film critic Joe Bob Briggs before he kicked off his How Rednecks Saved Hollywood show at Belcourt Theatre in Nashville. As I waited in line behind the crowds of other Joe Bob fans who had come to see him, I mentally rehearsed what I was going to say to him when my turn arrived. You see, regardless of how I might seem on social media or in my writings, I am in real life quite the socially awkward motherfucker. I rehearsed before I met Chris Sarandon. I rehearsed before I met Cassandra Peterson (Elvira). I’ve rehearsed in every celebrity meeting line in which I’ve ever stood.

For Joe Bob, I planned to start things off with “I’ve been a fan since the original Drive-In Theater on The Movie Channel.” Then I’d tell him about how his MonsterVision run got me through some of my toughest nights as I tried to transition out of college and kickstart my career in the real world. I’d gush about how grateful I am that he and Shudder came together to bring all of us Drive-In Mutants The Last Drive-In show. Finally, I’d hand him a couple of my trademark evil bunny stickers, he’d sign a copy of one of his books for me, I’d get a poised photo with him, and I’d be on my way.

When the big moment arrived, Joe Bob graciously began autographing my book (making sure to ask about the spelling of my name). Meanwhile, my rehearsed conversation went sideways as the words that spilled out of my mouth like vomit down the front of an old drunkard’s greasy wifebeater went more like this: “Hi, Joe Bob. I’m sorry if I say something weird or awkward. Celebrities make me nervous.” Then I asked for a photo, shoved my evil bunny stickers at him, and grinned like an idiot all the way to the seat I selected way back in the middle of the theater to limit further opportunities to humiliate myself.

So, that was that. Instead of having a short but relaxed conversation with the man, I had walked up to Joe Bob, given him a weird trigger warning about who I am, and walked off. Oh, well, I thought, at least I warned him. You can imagine my surprise and delight when the show started, and the first thing Joe Bob did was give all of us a tongue-in-cheek “trigger warning” of his own about the content of How Rednecks Saved Hollywood. 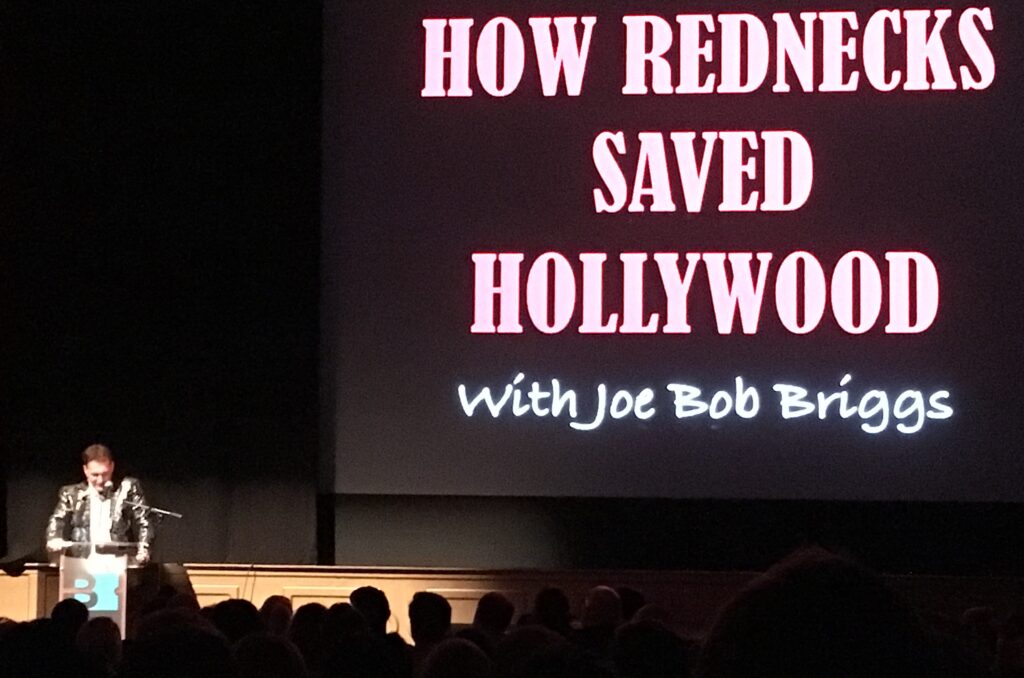 Part history lesson, part clip show, and all entertaining, Joe Bob’s How Rednecks Saved Hollywood is the man wholly in his element: hilarious, insightful, and courageously plain spoken. Joe Bob knows his stuff, and his audience is treated to nearly 2.5 hours of what fans of The Last Drive-In will recognize as those famous Joe Bob insights that are peppered throughout the drive-in movies he shares with us in our living rooms every week.

At first, the whole thing looked a bit like a high school world history lecture as Joe Bob presented a map and explained the exact historical origins of redneck as a term, as an entity, and as spawn from a religious denomination. Then, as the clips rolled, and Joe Bob defined what makes a redneck a redneck on film and in life, I found myself sitting in amazement not only at the sheer volume of movies in which rednecks have appeared but also at how those films either built or revived the box office decade after decade after decade.

Throughout the evening, Joe Bob described redneckdom in simple phrases that he then illustrated by way of stills, posters, and film clips from old to recent. In every still, every clip, and every anecdote Joe Bob provided I found myself not only enlightened as to how that particular film played into his presentation but also wanting to sit down and watch the thing, to experience the redneckiness of it myself.

As I write this, I find myself gleefully wanting to reveal some of Joe Bob’s points about being a redneck in a Hollywood film, to repeat his anecdotes and one-liners, to share with you everything I learned about how rednecks saved Hollywood without realizing it while Joe Bob was making me laugh. Doing that would not only be a disservice to Joe Bob by way of spoiling the show, but it would also be a disservice to you. Why, you ask? Because no one delivers an anecdote with a punchline that eventually circles back on a point he made 2.5 hours earlier like Joe Bob Briggs. This show is neither a history lecture nor a stand-up routine. It’s an experience, and it’s difficult to describe it any other way.

If Joe Bob brings How Rednecks Saved Hollywood to your town, do yourself a favor and see him. He’s funny, folksy, charming, and insightful. He’s also not particularly politically correct. But then, would any real Drive-In Mutant want him to be? The audience at Belcourt Theatre on Thursday night didn’t come to see Joe Bob be PC. My guess is that most of his audiences in other towns don’t expect that either.

Consider that your trigger warning.

Upcoming dates for Joe Bob Briggs’ How Rednecks Saved Hollywood are available at his site. The Last Drive-In has ended its first season on Shudder and is available for streaming there. A second season is forthcoming.