High on the Hog is really a story about family, when you get down to the heart of the matter. It centers around Big Daddy and the only things he loves in life: his family, and their little piece of property. He inherited the property from his father and carefully cultivated his family over time. They just happen to grow some of the best pot in the country. The family’s bonds are tested as their farm becomes the target of a federal agent bent on busting Big Daddy and killing legalization.

I have been stoked about this movie since we heard about it from director Tony Wash during an interview last November. I didn’t know a ton about the movie going in but what I did know was enough. High on the Hog is an homage to grindhouse featuring Sid Haig, a shit ton of weed, and Ellie Church. It was a long-ass wait but finally this incredible film is seeing the light of day and I am fucking here for it. With that being said, let’s get into it!

This isn’t a horror film. Let’s go ahead and get that out of the way. High on the Hog is like the glorious love child of a stoner flick, an exploitation film, and a crime drama. It doesn’t deliver a ton of violence or buckets of blood. What it does deliver, though, is a solid story, some great characters, and an overall narrative that may make you change the way you look at the world. There are actually two stories going on at the same time. As with actual family life, the things inside the family are at the forefront while what is going on in the outside world is a subplot. 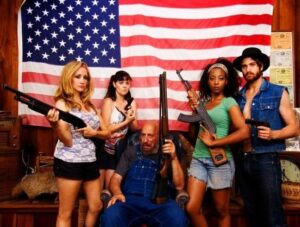 On the farm, Big Daddy (Sid Haig) is the loving patriarch of a family made up of women. Together, they take care of each other as well as the farm and their crops. They are just trying to get by and mind their own business. Big Daddy never planned to be the head of a big cannabis grow operation but you go where the money is and do what has to be done.

They end up in the crosshairs of an overzealous and crooked DTA agent named Agent Dick (Joe Estevez). He will do whatever it takes to bring down the family’s operation and put Big Daddy in a cell. What he didn’t count on is Big Daddy being a pillar of the community. With every turn, the agent gets more and more crooked and ready to break the law to achieve his goal.

What I found really interesting is that even though they are growing and distributing a bunch of fire-ass weed, the family is never really painted as a criminal organization. In fact, the villains in this film all wear badges. It’s a look at how sometimes folks have to step outside the law in order to get by and that doesn’t make them bad people.

Big Daddy and his family at dinner.

The Rest of the World

The other half of the narrative focuses on the government and its agents. The DTA agents in this film have found a way to poison the weed that his hitting the streets in order to make anyone who smokes it go batshit crazy. Whatever it is that they are using makes the threats in Reefer Madness look tame. The goal is to show the public how dangerous marijuana can be and halt the progress of legalization.

Mary Jane playing the tunes and bringing the news.

Most of this narrative is told through cutaways to a radio host named Mary Jane (Ellie Church) who smokes a bunch of weed, and keeps her listeners up to date with the happenings of the world. I’m usually dead-set against radio or TV clips being used as exposition but it really fits the tone of this film. Also, any excuse to put Ellie Church on screen is good enough for me.

This movie just looks cool. It has that gritty grindhouse feel combined with some gorgeous cinematography. From time to time there are some really cool little cutaways between scenes that feature some really cool and random shit.

Why? Because it’s fun. That’s why.

The random shit doesn’t stop with transitions between scenes. Throughout the film there are little things superimposed on the screen that connect to what’s going on in the scene. Like the exposition via radio, these things are something that wouldn’t work in other films but in High on the Hog it fits like a glove.

The performances in this film are great across the board. The family is full of entertaining and believable characters. Agent Dick is one of those characters that you love to hate and Joe Estevez fucking nails every scene. It goes without saying that Sid Haig is great in the role of Big Daddy. For someone who is only familiar with his work from the last decade or so, it is really cool to see him in a role like this.

If High on the Hog was just a weed-infused grindhouse crime drama packed to the brim great characters and more T&A than you could shake a stick at, it would be enough. It isn’t though. This is a very pro-legalization film that uses the lens of an exploitation film to explore corruption in law enforcement. As I mentioned above, it also plays with the perceptions of those who are the victims of corruption and heavy-handed prohibition enforcement.

All in all, would I recommend this movie? You’re damned right I would! High on the Hog is a film with something to say but it is also a super fun grindhouse-inspired ride. It’s full of weed, humor, drama, tension, and eye candy. The spirit of old school exploitation lives on in High on the Hog. It’s available now on a bunch of different digital outlets including Amazon and Vudu. So, arm yourself with your favorite smoking method, pack it tight, and take this ride!