Forgive my belated humpfest of The Last Drive-In. I have a good excuse. I was drunk for a solid week and I accidentally submitted this to Jezebel and it did NOT go over well. Next week I’ll tackle a two-in-one like the previous weeks. So here, have some slightly outdated Joe Bob! (still smells fresh, trust me).

Wellsir, ol’ Joe Bob pitched me one helluva wobbly curveball of an episode and goddamn it all I’m pleased as spiked punch at prom. High-caliber Sammy Sosa types like myself have no problem with curveballs, sliders, changeups and whatnot, but heck if shows like this too often go for the easy pitch. As much as I love Joe Bob and MonsterVision and The Last Drive-In, producers like to serve up exploitation classics like so much Jell-O at a lame Mormon kid’s birthday. It’s easy to riff on the likes of Cannibal Ferox and Dawn of the the Dead and fucking Chopping Mall: it’s low-hanging death fruit that is, frankly, tired. I love those flicks as much as the next closeted sociopath who totally combs the hair of his Michael Myers doll weekly, but maybe we need to start diving nips-first into some newer fare. Joe Bob says more or less the same thing in myriad interviews and rants, that showrunners want to foist the classics on a fella who was doing “the classics” when they were brand spankin’ new! So it tickles my pickle that this week’s installment of The Last Drive-In dares to pair The Changeling, a classic, contemplative loss-and-redemption drama dressed up as a ghost story starring an Oscar-winner, with fucking DEATHGASM! Deathgasm being a 2015 New Zealand gorefest about dopey metalheads and dice-rolling full-time virgins accidentally bringing about a sort of quasi-apocalypse (if y’all don’t know about Deathgasm, well, then there’s no hope for you and I’m okay with that).

Odd, but refreshing bedfellows these two flicks have literally nothing in common. One has General Patton himself, George C. Scott; the other is a cavalcade of relatively unknown kiwis that have THE MOST adorable accents. One has lines about dealing with the tragedy of losing a child and spouse; the other opens with a character describing his uncle as “balls-deep into Jesus.” One has dramatic heft; the other an extended sequence where massive rubber cocks are used to kill zombies. Is one better than the other? Maybe. I don’t typically go for ghost flicks or haunted houses: I prefer psychopaths, killer robots, Nazi BDSM mistresses, and anything involving cannibalism. That said, The Changeling is a solid drama that opens with George C. Scott calling for a tow in a phone booth while his daughter and totally-not-age-appropriate wife are flattened by a dump truck in a snowstorm.Which is pretty rad as openings go: child death is always a good hook, right? He then proceeds to buy a giant mansion in Seattle (based on a real mansion in Denver literally three blocks from my shitty shithole crapfest apartment) and slowly realizes the damned thing is haunted. There’s a bouncing red ball that was the spookiest object before the last football O.J. Simpson touched; there’s a pretty well-made, non-hokey seance; and a denoument that is more a tale of abuse and back-room cover-ups than your typical spookfest.

Deathgasm on the other hand, is a balls-to-the-wall gorefest that takes nothing about itself or the genre seriously, though it does deal with its subject matter sincerely. And that subject matter consists of a bunch of metalheads and geeks in New Zealand who accidentally summon an Evil Dead-like force that possesses their families and townsfolk. There’s a bit of a b-plot about romantic betrayal that I could do without, and Joe Bob more or less dismisses. Ultimately it’s a well-produced vehicle for smashing the shit out of zombies; using 20-sided dice as ammo in a paintball gun; and, as I mentioned earlier, teaching us all that a chainsaw is less effective against your zombified aunt than a 13-inch rubber cock. 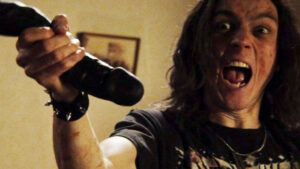 Joe Bob’s rants this episode were pretty near and dear to my heart: ragging on Teslas and whiskey. He somehow gets into a snit about Teslas and how they used to be the purview of the super wealthy, but now with a price-tag closer to a high-end Toyota, these ‘lectric vee-hicles will be more or less accessible to any asshole with elbows in North America. I’m as eco-conscious as the next guy who willingly got a vasectomy so as not to further pollute the world with the real greenhouse gas (humans), but Teslas are a fucking scam that aren’t doing shit to save Mama Erf. To wit: they don’t run on gasoline, but don’t you have to plug them in to something to charge them? What in the hell do you think that charger is connected to? Chances are it’s connected to grid powered by coal, oil, or, at the very least, natural gas. It’s not connected to wind, water, hydrothermal, solar, or fucking butterfly wing-flaps, so all you’re really doing is shifting the evil deed of polluting to an unseen source. But you can feel all warm and fuzzy in a car that makes no sound and looks like something a modern day Biff Tannen would use to drunkenly kill George C. Scott’s wife and daughter!

Finally, ol Joe Bob went off on whiskey. He seems to be a man who knows his varieties down to the atom, but has some qualms about the industry as a whole. His big gripe is what he calls “whiskey bottle performance art”, or, to be specific, “craft” whiskeys being bottled in fancy-ass bottles that hearken back to the old days of the Whiskey Rebellion, but aren’t really any good. They focus more on branding than quality to appeal to the millennial subspecies (of which I’m a part) the demands things to be niche rather than authentic. Heck, most localized distilleries don’t even use the water near them! They craft some fancy, fake history-laden labels and lore, but have water shipped in from an aquifer 500 miles away. Occasionally you get a small distillery in a place like Colorado or Kentucky or Tennessee has access to positively divine water; but whiskey from Philadelphia, where the closest source of water is 67% murder victims and the other 33% is only legally defined as water, isn’t okay. I’m with Joe Bob all the way, and I say this is as a craft beer enthusiast who also thinks Jim Beam tastes like it was made by booze angels out of the sweet sweat of God herself. And Jim Beam is now owned by Suntory, a Japanese booze concern. It is what it is. 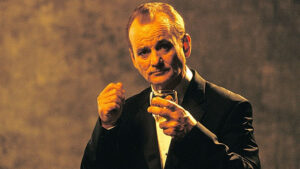 On that note, in the words of Bill Murray, “for relaxing times, make it Suntory time.” And it’s motherfucking Suntory time in this house.