Okay guys. Are you ready to get a little personal? I sure as hell hope so, because that’s what is about to happen.

Recently it came to my attention that if you search for #horror on Instagram you get this nifty little message. 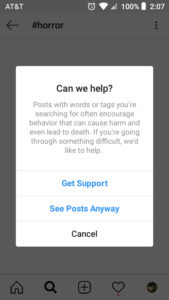 JimJam brought it to my attention a few days ago and it really got under my skin. It sat there and festered for awhile and finally I decided that I had to say something. After deciding to write this I did a little research to discover what hashtags the eggheads running the algorithm over at Instagram thought warranted the above disclaimer.

I’m probably on some kind of watchlist now but it’s worth it to make a point. I found that you can search for #gore, #goreporn, #torture, #tortureporn, #extremehorror, #exploitation, #SnuffFilms, and all manner of weird sex stuff with no disclaimer. Snuff films y’all. Searching for posts related to snuff films is hunky goddamned dory but if you wanna look for posts related to a major genre of art you might need some help according to the folks at Instagram.

Interestingly enough, I did get that pop-up for two other hashtags. If you search for depression or suicide, the warning pops up.

To reiterate, snuff and torture is fine. Horror is lumped in with major mental illness and offing yourself.

Are you a little more pissed about this? Good. So am I.

You see, I don’t write for hours a day for two different horror sites while also working on other projects because I’m getting rich. Hell, I don’t even do it because I think I’m going to get rich off of it one day. I do this because I love to write and  horror is my passion. I don’t care if it’s literature, cinema, games, art, or fashion — horror is a huge part of my life.

I’m not going to sit here and say that horror saved my life nor will I bore you with my life story. I will, however, say this: horror helps me.

Without going into detail, I’ve got a few screws loose and a history of substance abuse. I’ve been off the hard shit for over a decade and watching horror movies is one of the things that helps keep the needle out of my arm. When I’m plotting a relapse or even if I’ve  had a fucked up couple of days and feel like I’m being crushed under the weight of the world, I watch a good (or bad) horror movie. Sometimes that hour and a half or horror therapy really does the trick.

See, I don’t do meetings or religion but even I know that sometimes I need some healing for my soul. Instead of going to The Rooms or a church, I enter the tabernacle of terror. I fall at the altar of all that is spooky. My Rooms are torture chambers, gore is my sacrament, and I take communion among cannibals.  My Our Fathers are one liners and my saints are independent filmmakers. I’m not saying that horror is a religion but if it was I would be a devout practioner.

There’s just something about sinking into a world just a little darker and more macabre for awhile that I find incredibly therapeutic. I don’t know if it’s watching someone have a worse time than me or if there’s some dopamine trigger attached to ghosts and gore. I’m not a professional. I just know it helps.

Would I still be alive and off the shit if it weren’t for horror? Probably. I have no interest in finding out, though. That’s for goddamn sure.

One Time for the Community

Above all, horror has shown me that I’m not alone. There’s this whole community of people who are brought together by passion. We recognize something in each other that sets us apart from the rest. I’m not saying that we’re special or superior. I’m just saying we’re a little different and that is what brings us together. Sure we bicker and bitch and nitpick but at the end of the day, it’s all for the love of horror. Some of the most laid back, accepting, and talented people I’ve ever met are members of the horror community.

That’s why I’m so pissed about that pop-up. It’s really damaging. The last thing anyone needs is to be told they’re wrong for liking something especially something harmless. Yet, here stands Instagram lumping horror in with suicide and depression. A major social platform just became that asshole aunt who says “ugh, how can you watch that crap? You need help.” This is yet another example of inclusion as long as you fall in line. It’s not just a pop-up it’s a middle finger. It’s the stigma of being a horror fan that I thought was dying rearing it’s ugly head again. It’s bullshit is what it is.

Look, I’m not writing this to call people to action. Hell, I don’t even know what action there is to be taken. We’re all kinda at the mercy of these giant platforms. I just know I’m not alone in feeling like this and I want you to know that you aren’t either. Maybe I’m just screaming my frustrations into the void. Even if that’s all I’m doing, I’m doing it out of passion.

Before I wrap this up I feel like there are a few more things I need to add.

First and foremost: I’m not advocating for horror movies as replacement for professional help. If you do need help, get it. Your mental health is as important as your physical health. Don’t let the stigma surrounding mental health keep you from getting help any more than you would let it stop you from watching horror films. 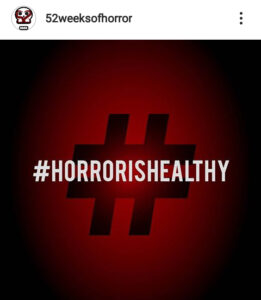 Finally I would like to give a shoutout to 52WeeksOfHorror over on Instagram for starting the #HorrorIsHealthy hashtag and for Danno for sharing it. Without seeing that post I might have decided to sit down and write this. They’re also the folks who may have some kind of plan on what we should do.

Me? I’m just a gorehound with a bone to pick and a platform on which to do it. Thanks for stopping by, guys. We’ll be back to our regularly scheduled nonsense as soon as possible.