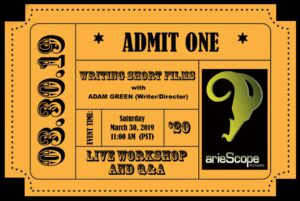 Get Your Ticket Here

ArieScope is thrilled to announce the first workshop event in our all new “ArieScope Live” series: WRITING SHORT FILMS with Writer/Director Adam Green! This interactive live workshop and Q&A will take place on Saturday March 30, 2019 at 11am PST!

Writer/Director Adam Green may be best known for his feature films (the HATCHET franchise, FROZEN, DIGGING UP THE MARROW, etc) and for his television series (HOLLISTON) but over the last two decades he’s also written and directed dozens (and dozens) of popular short films – including viral hits that have been viewed millions of times like 2009’s JACK CHOP and SABER (which won 2 awards in Lucasfilm’s STAR WARS fan film awards and spawned 2 equally successful sequels). From writing and directing all 20 of the annual ArieScope Halloween short films… to writing American Eagle Outfitters’ hit short format series IT’S A MALL WORLD and WINTER TALES as well as the Microsoft/XBOX “horror meets comedy” popular short FAIRY TALE POLICE… to his work as a Producer and the President of of his own production company (ArieScope Pictures)… Adam is a truly prolific short film creator with 20 years of experience to share. In this special WRITING SHORT FILMS workshop Adam will be specifically speaking about the craft of writing short films, giving tips and advice, and answering your questions about the process – LIVE! Fans who participate in this special workshop will also be emailed a copy of Green’s screenplay for his 2015 short film MONSTER PROBLEMS which he will be referring to as one of the samples throughout the event. Whether you are a screenwriter creating your own short films or just a fan of the short format medium – this workshop is not to be missed!

There are only a limited number of “virtual tickets” available so that attending fans will all have ample opportunity to participate in the live chat thread.

DO NOT SHARE YOUR ACCESS INFORMATION WHEN YOU RECEIVE IT SHORTLY BEFORE THE EVENT BEGINS. If the number of participants rises above the amount of “virtual tickets” sold the event will be ended.  (Don’t be that guy/girl!) All sales are final. Unless ArieScope needs to cancel or reschedule this event due to unforeseen circumstances there are NO REFUNDS so make sure that you are available to attend before you get your “virtual ticket” and mark your calendar.

This workshop is expected to last approximately 90 minutes but may go longer.

DON’T WAIT TO GET YOUR TICKET AND MISS OUT!