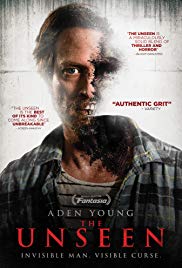 The Unseen follows Bob, a man with a strange secret and his reunion with his estranged wife and daughter. When his teenage daughter, Eva, starts acting out his wife calls him to come and have a talk with her, hoping it would help. Instead of having awkward estranged parent chats, Bob ends up having to look for Eva when she goes missing after visiting a partially abandoned mental hospital.

First off, Bob’s secret is that he is slowly disappearing. He is full on becoming the invisible man in the most gruesome way possible. This is a condition passed down to him from his father’s side of the family and it’s why he decided to fuck off to the middle of nowhere instead of staying with his family. It doesn’t take long to find out that Eva has his unfortunate condition which is at the core of her recent behavior. Let me just say that the way they handle the slowly becoming invisible part of this movie is so cool. For instance, a piece of his side is invisible but the organs next to the invisible area are definitely still there and fully visible. The blend of CG and practical effects in this movie is fucking brilliant. Seriously, if more CG stuff looked this good we wouldn’t bitch about it quite so much.

Beyond looking really good, this movie has a cool story line and a big heart. I mean, you could really relate what they’re go through to any hereditary mental or physical disorder. The father removes himself from the situation so that his daughter doesn’t have to see him suffer something he is unable to explain; at the same time he is praying that his affliction doesn’t get passed on to her and when it does, the heartbreak is obvious but he is also there to help her cope with it. Really, it’s the subplots in this movie that bring it into thriller territory and that’s okay. All of the elements come together in the end to make a really enjoyable and endearing film.

The performances in this movie are solid. Even in characters that only serve to drive the plot forward are well-written and well-performed. Bob (Aden Young) and Eva (Julia Sarah Stone) are especially good; they carry most of the emotional weight of the movie and they do it well. My favorite performance, though, goes to the guy who gets his ass fully kicked by an invisible assailant. That couldn’t be an easy scene to shoot and he pulled it off brilliantly. I don’t want to be the guy who constantly references Fight Club not since Edward Norton have I seen someone get their ass kicked so well by someone who wasn’t there.

All in all, would I recommend this movie? Yeah, I would. It’s a good-looking drama/thriller with some incredible visuals and a big heart and surprisingly relatable characters. The Unseen is a great example of the good things you find when you decide to broaden your horizons and watch something different every now and then. Monarch Home Entertainment is handling the US release and The Unseen will be available on DVD and VOD February 26th.