What if Count Dracula was dropped onto the streets of a modern American city and you were the only person who knew about it? Countless films and novelizations have attempted to answer the question over the decades. Most of them either simply insert the age-old story into a modern backdrop (1979’s “Curse of Dracula” serial in the NBC’s Cliffhangers television show, Fright Night, The Lost Boys, etc.) or vie for comedy (Love at First Bite, Once Bitten, Vampire in Brooklyn, you know the drill). In Hunter (2018, Skyfire Productions), director David Tarleton and writer/star Jason Kellerman have managed to avoid those particular solutions to the problem and instead created what M. Night Shyamalan might have dreamed up if Unbreakable had been about a vampire hunter instead of a superhero.

Hunter Vanelson (Kellerman) is an underground fighter who finds himself homeless following his flight from a home invasion in which his family was slaughtered. The men who committed the act got away with it, leaving Hunter wandering the streets in search of a hot meal and a bed while being tortured by horrible nightmares about the incident. While seeking shelter, Hunter meets Danni (Rachel Cerda; Chicago Fire, Chicago P.D.) a graduate student who has started a talk therapy shelter program in order to address the addiction and mental illness problems that often lead to homelessness. As Danni and Hunter work on Hunter’s personal demons, Hunter begins to edge closer to the truth about what happened to his family. As it turns out, the truth has teeth.

With professional-level scripting, direction, acting, and scoring, Hunter is an enjoyable watch. It takes its time to build the story and allows you to get to know the characters, although some viewers might perceive the slow burn as a little too slow. Twenty minutes into the film, I was beginning to wonder when we might see some direction, some puzzle piece-fitting that would lead to some payoffs. To that end Hunter definitely delivers, but you have to be patient.

Kellerman’s script has depth. The characters are slightly more complex than their problems, although confronting one’s problems and past is a major plot point. The introspection in this film could get tedious if you go in expecting a 90-minute Hugh Jackman Van Helsing-style brawl, although the story adequately sets up a potential sequel that promises to be more action-oriented than this outing. Think Batman Begins if it were about a young vampire hunter and retitled Abraham Van Helsing: The Early Years. The fact that the physical vampires led by Dracula-style patriarch Volakas (Nick Searcy; The Shape of Water) take second place to Hunter’s personal demons in this story is the beauty of it.

Technically, the film is only slightly less than perfect. There are some obvious differences in audio quality amid sections of dialogue. It’s not enough to completely pull the viewer out of those scenes, but it is noticeable. Meanwhile, Kellerman’s portrayal of the title character will probably remind you of Keanu Reeves, not only because he somewhat resembles that actor but also because he sounds a little like him. Kellerman’s dramatic scenes and action delivery are spot-on. His wise-cracks, which are fortunately few, could use a little work. For example, there’s a running gag in which people are referred to as “Chuckles.” Hunter knowingly cracks wise about it when he, Danni, and fledgling vampire Luke (Ryan Heindl) are conversing outside the homeless shelter, but it falls flat.

Overall, Hunter is a worthy effort for its creation of a new antihero who makes it his mission to rid himself of his personal psychological demons by literally ridding his city of physical ones. I do not know whether any sequels are planned, but I would not be surprised.

Hunter is currently available for rent or purchase on Amazon Prime. 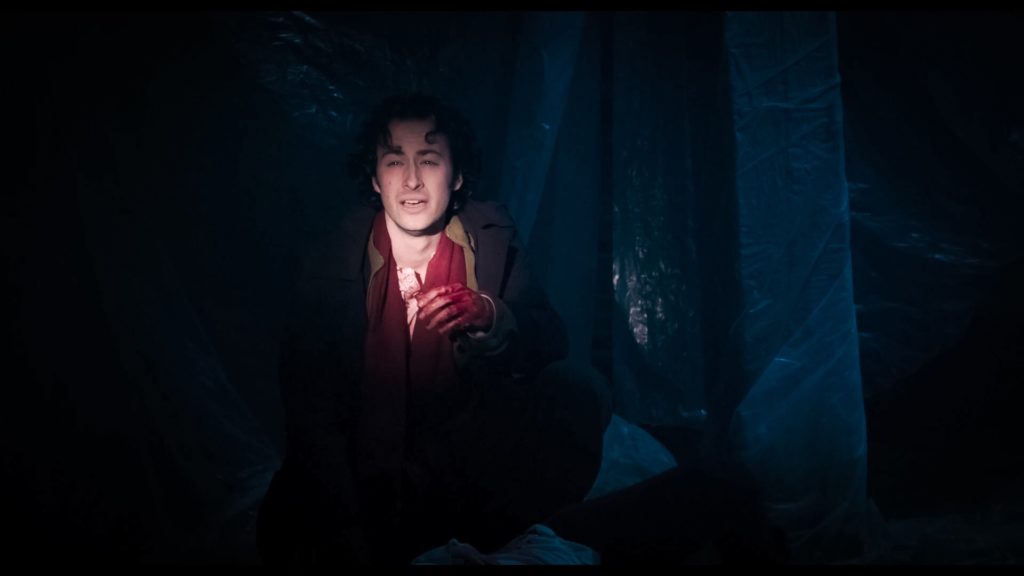