From Ghosts, to Birds, to Zombies: Netflix’s Growing Menagerie of Horror 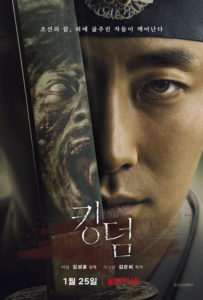 After Netflix’s outstanding success with such original horror delights as the television series The Haunting of Hill House and the film Bird Box, the streaming service will expand its scope of terror to an international perspective with Kingdom, an original Korean television series (the second Korean original series by Netflix overall, according to Bloody Disgusting) that explores a zombie apocalypse in medieval times:

Set in Korea’s medieval Joseon period, [the series] tells the story of a crown prince who is sent on a suicide mission to investigate a mysterious plague that’s spreading across his country. The truth threatens the kingdom, when he discovers that it is an atrocious epidemic in the form of zombies.

The series is directed by Kim Seong-hun, and written by Kim Eun-hee (who adapted this from her webcomic series, “Land of the Gods”). The stars include Ju Ji-hoon, Bae Doona, Ryu Seung-ryong, Kim Sang-ho, Heo Joon-ho, Jeon Seok-ho, and Chu Hun-yub. The first season will premiere on January 25, 2019, with a second season already ordered.

The Scariest Video Game Franchise: The Legend of Zelda