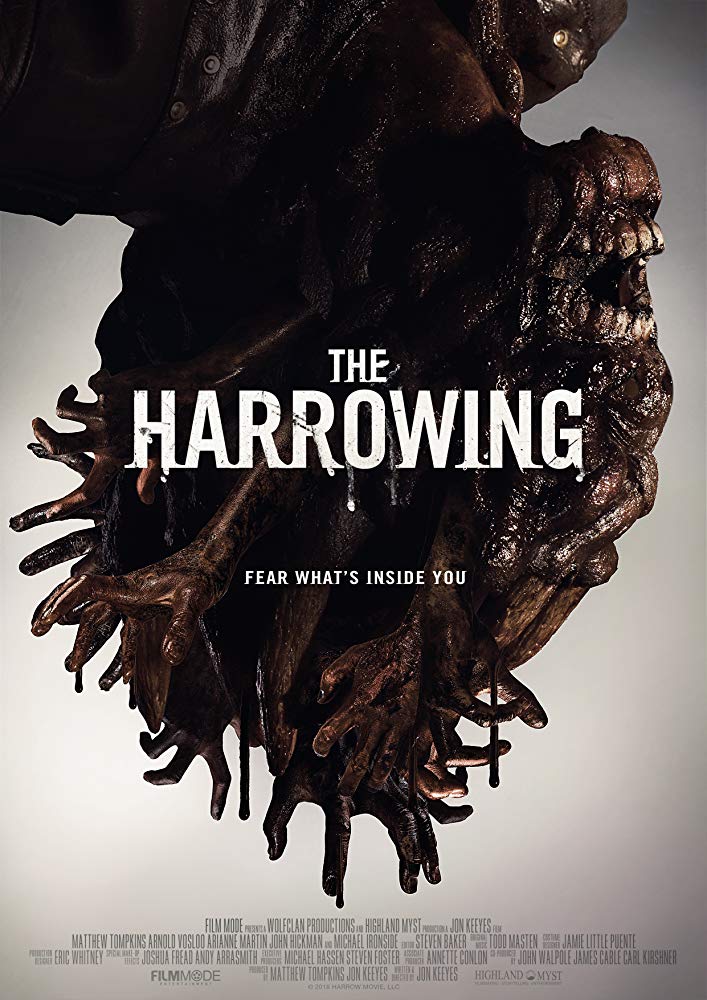 Everyone has a past, the old saying goes. Everyone has that one life mistake, that one regret that haunts them for the rest of their lives. It might not be forever at the fore, but it’s always there and ready to rear its demonic head at the most inconvenient moment. Metropolitan Vice Det. Ryan Calhoun (Matthew Tomkins) in writer/director Jon Keeyes 2018 psychological thriller The Harrowing is no exception.

The detective is beset by nightmares about a previous case in which his partner was slaughtered by members of a child trafficking ring. Calhoun blames himself for his partner’s death because the sting fell apart when he left the other detective alone for a minute to visit the restroom. His guilt comes back to haunt him when he goes for coffee and leaves two other detectives alone in a hotel room during a prostitution sting. He returns to discover that his partner, the prostitute, and her client have all been slaughtered in the prostitute’s room. The third detective Roy Greenbaum (James Cable) is still alive, but has gone insane and is consuming the flesh of the corpses. After a struggle that results in Greenbaum’s death, Calhoun is placed on administrative leave, where he begins to conduct his own investigation into the strange events he’s witnessed.

As his investigation continues, Calhoun discovers that Greenbaum was once a resident of a psychiatric ward that appears to have a sordid history. With approval from his division’s Lt. Logan (Michael Ironside), the troubled detective is admitted to that same hospital in order to uncover the truth. Suddenly the lines between reality and psychotic fantasy begin to blur as Det. Calhoun, in the custody of the hospital, becomes haunted by nightmarish visions of demonic entities. Calhoun then struggles to discover the truth behind Greenbaum’s rampage without losing himself in the process.

With Tompkins’ look and a presence evocative of action heroes like Harrison Ford and Patrick Swayze, you might be forgiven for at first confusing The Harrowing with an action film or, at the very least, a police procedural. The story begins that way, at first feeling like a hard-boiled crime thriller. The entire first half of the film plays out very much like a product of that genre, except without cheesy 1940s private dick narration. After Calhoun is admitted to the psychiatric hospital, both the pace and the feel of the movie shift into something more akin to an episode of The Twilight Zone. There’s a significant increase in intensity, fright, mystery, and creepiness as the last half of the story unfolds and the curtain that segregates Calhoun’s reality from everything else slowly begins to peel back.

Keeyes direction is superb and his storytelling is spot-on. The actors all look and feel familiar to their environments. The dialogue is a bit stilted for some of the secondary characters in some scenes, but not enough to yank the viewer out of the story. The best performances are from Tompkins and Ironside, who horror fans will recognize from a treasure trove of classics like Scanners, Top Gun, Total Recall, and Starship Troopers.

Like any good horror film, Keeyes expertly uses music, sound, and lighting to heighten the creep effect. There is a grit to the environment that is accomplished by the way each set is lit. There are also some great make-ups and a couple of good jump scares, although the film smartly does not rely on them.

As a horror film, The Harrowing is worth a watch. If you’re averse to labeling a movie “horror” (in which case, why are you reading this review on this site?), you can comfort yourself by considering it a “psychological thriller” or “crime drama,” if you like. The empathy you’ll feel for Tompkins’ Ryan Calhoun character combined with a twist worthy of The Twilight Zone at its height makes this film’s nearly two-hour length time well spent.

The Harrowing is currently available to rent or buy on Amazon Prime Video.