Luring a viewer into a film’s story requires two key ingredients: a hook and the suspension of disbelief on the part of the viewer. Sometimes a hook is enough to provoke a viewer into adding a dash of suspension of disbelief, just to see where things lead. Sometimes it’s not. Writer/director Jen McGowan‘s soon-in-theaters survival horror film Rust Creek has a familiar hook. Ambitious college student Sawyer (Hermione Corfield) gets a call about a job interview in Kentucky, but gets lost in the woods while on her way thanks to an outdated GPS app on her phone and a confusing paper map.

As she attempts to get her bearings, backwoods outlaw brothers Hollister (Micah Hauptman) and Buck (Daniel R. Hill) see Sawyer stop her car and worry that she might have witnessed their attempts to cover up a crime. They approach her, at first playing friendly, and that’s when things go south. Hollister attacks Sawyer. In the ensuing struggle, both she and Buck are stabbed. She breaks free and makes a run for it into the woods, her phone and wallet abandoned in her car. This was the point in the film (approximately ten minutes into its nearly two-hour run length) that my suspension of disbelief began to waver.

Although its hook is solid, Rust Creek seems to rely on convenient lapses of physics and intellect in order to move from one scene to the next. The stab wound in Sawyer’s leg is severe and bleeds profusely, yet she manages to struggle free from her would-be captors and sprint away from them, running with the same speed and agility that she had while running on her university’s track when she received the call about the job interview. After Sawyer flees, and when she presumably feels like she’s put some distance between herself and her pursuers, the stab wound becomes suddenly overpowering, causing her to stop long enough to try to clean and bandage it. From there, she walks on it with the care of someone who has been stabbed in the leg.

It’s possible that the filmmakers can chalk up Sawyer’s initial imperviousness to the pain and muscle damage of the stab wound by citing adrenaline. She is running for her life, after all, and her fight or flight response has no doubt kicked into overdrive. I can allow myself to buy that. However, things take another unrealistic turn when the local sheriff O’Doyle (Sean O’Bryan) and his Deputy Katz (Jeremy Glazer) get involved. O’Doyle receives a call about Sawyer’s abandoned vehicle and things, at first, progress as naturally as you might think with law enforcement’s involvement. However, the character of O’Doyle comes off as incredibly tone-deaf when it comes to the signs and signals of a crime having been committed. There’s a plainly evident reason for that, and it’s one that the audience can work out long before it is realized in the script. This fact does not speak well of Deputy Katz’s intellect. He is eventually smart enough to put the pieces of a potential kidnapping together, but not smart enough to see the immediate failings of his boss and sound the alarm. 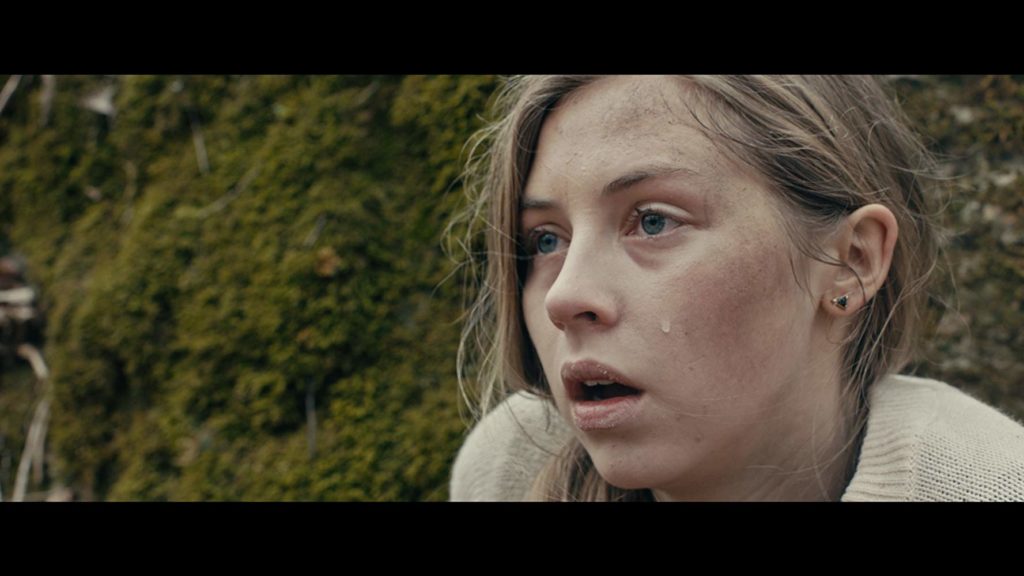 Sawyer (Hermione Corfield) plots her next move while on the run from her Rust Creek attackers.

Meanwhile, Sawyer has been captured by the outlaw brothers’ cousin Lowell (Jay Paulson), who is the local meth cook for a drug ring in which the brothers and a certain other individual are a part. Lowell nurses Sawyer’s stab wound and hides her from his nefarious cousins, but for reasons that are never particularly clear, does not seek to get her any medical attention or to help her escape these Kentucky backwoods. After some thought, I concluded that there might a bit of Misery going on in the plot: rescuer holds rescued captive because infatuation. The real reason never seems to become evident, nor does Sawyer ever seem to directly ask why. During her unwilling stay with him, she slowly begins to trust Lowell, who then inexplicably teaches Sawyer the art of making meth while the deputy becomes more suspicious of the sheriff, who cracks whips on the brothers, who continue to search for the missing Sawyer in the hopes of silencing her by death.

At its core, Rust Creek attempts to evoke the fear of being kidnapped by backwoods people without a conscience in a fashion similar to classics like The Hills Have Eyes, Deliverance, and Wolf Creek. From a technical standpoint, it succeeds in this endeavor. The direction, cinematography, acting, musical cues, and settings are all expertly done. The best of the actors are Corfield, Paulson, Hauptman, and Hill, all of whom slide right into the skins they’re supposed to inhabit for this story. You will feel like you’re sitting down to a polished cinematic experience.

That said, this film is a one-time watch for me because I was not able to suspend my disbelief regarding the choices the main characters often made. Those choices failed to reconcile with who they were supposed to be. For example, Hollister and Buck are allegedly expert trackers who have lived their entire lives in the Kentucky backwoods in which Sawyer is lost. Yet they are easily confused and led astray when Sawyer throws a rock some distance from a hiding spot. They make a few other choices (and a lot of noise) that might also make expert trackers cringe. Similarly, Sheriff O’Doyle seems to be either particularly lacking in the skills and intellect that are required for his job or believes everyone around him is too stupid to understand that he’s not really trying to solve a case. His lies sound like lies, yet he manages to fool the more hawkish state police. Also, none of the law enforcement officials in this area of Kentucky are apparently familiar with Kevlar.

Rust Creek is worth a watch, especially if you prevent yourself from questioning the decisions of the characters as the story unfolds. If you’re unable to do that, you’ll have a more difficult time staying with it until the end. A little more depth to the characters and some logical consequences to their decisions and actions would help this film immensely. Also, a bit of unnecessary exposition excision (such as the how-to on meth making) could cut the run-time of this film to 90 minutes or less, which might increase the tension a few notches in the middle.